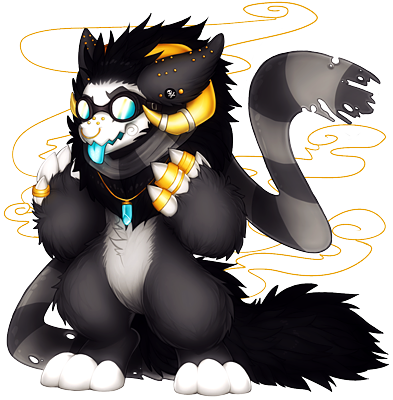 THANK FOR FOR COMPLIMENTS~!! i cannot always reply to each individually but i read and treasure each one! it means the world to me! :'3c

noire is an eccentric, slightly socially awkward, enthusiastic, and curious wickerbeast who's set up shop as an alchemist in a cave-turned-abode just on the outskirts of dragonsmaw manor. he loves collecting any sort of shiny trinket or piece of junk he finds, either as eye candy for his shelves or to plunk it into a beaker and see what it does in a potion because... well, just because he can.

he's constantly experimenting with whatever ingredients he can get his hands on, seeking new potion recipes for the sake of science! ...and for the sake of coin! both, both are good.

as brilliant as he is, his brews have a tendency to have results that are... either "explosive" or "unintended at best". thankfully, he now tests the results on plants instead of himself, learning that lesson after stumbling on his first accidental-successful recipe for a morphing potion-- his visage was originally considerably more ermine, you know.