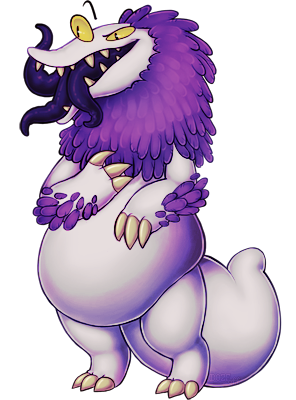 A big friendly monster that lives in the same house as Scratch. They found and rescued Flitt from the dangerous wilds surrounding Dragonsmaw. It had been another bountiful gathering session out in the wilderness for Glut. Monsters never seemed to pay them much mind, thankfully, so it was relatively easy to get around between scrap heaps without much worry. Glut returned safe and sound as they usually did, and upon finding Scratch in the middle of sorting the storage room, coughed up their haul in a messy, goo-coated pile of supplies.

Scratch turns and gives Glut a look of exasperation.
"Glut, this is exactly why you get sick all the time, can't you just use a bag like a normal villager?" Scratch asks, to which Glut turns their nose up and scoffs.

"Scratch, do I look like a normal villager to you?" Glut retorts with an air of smugness before dropping back down onto their front limbs and lumbering away, leaving Scratch to clean and organize their mess.