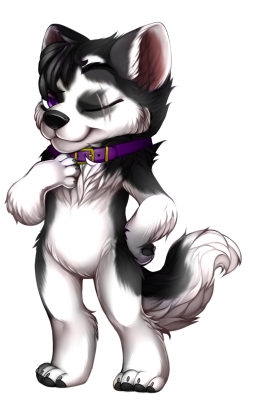 Magenta is infected with Lycanthropy. Changes into a beastly monster after exposure to moonlight or especially frustrating board games. Howling at the moon relieves the symptoms for a little while, but use a Golden Apple for best results.

Also known as his code name, SaF. Magenta (Magent/Mag) is a warrior from Aster Guild. He has determination and is willing to risk his life for the pride and victory in a battle. Though the others may not agree, he's quite stubborn and wouldn't listen to anyone else if it is to nitpick about his method of getting things done.

His left eye was blinded from a battle against a cat, in which he lost to. He held so much grunge toward cats since then, not in the way as ordinary dogs would have toward cats. He wants them gone, all of them, for one that made him blind and destroyed his pride.

He now lives together with his boyfriend, Oliver. They don't talk too much as both of them hold on action speaks louder than words. Still, Oliver was able to pick up most of what Magenta has to offer