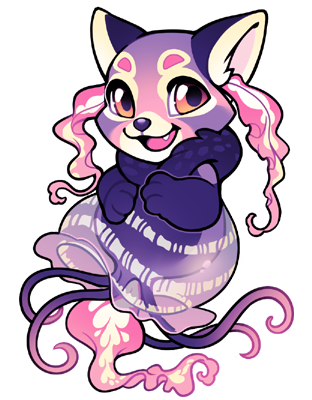 Aurora is infected with Vampirism. Symptoms include craving blood, sensitivity to sunlight, an allergy to garlic, and changing into a bat after especially forceful sneezes. If they start to sparkle, immediately consume a Golden Apple to cure the infection.

Walking down the dual roads of Ouroboros, you see an aquatic villager turn a corner, wave, and then start swimming down the water half in your direction.

"Oh, um, hello! I haven’t seen you around; you’re a visitor, right? Cool! My name’s Aurora, and I’m a warrior by trade."

"Haha, yup! I may be pretty young but I’m quite a force to be reckoned with in the battlefields. You know how the saying goes; 'though she be but little she is fierce'."

"How young? I’m a preteen, so older than the kids - that’s Lyra, Caspian, and Azalar - but younger than everyone else. That makes me the youngest warrior too. Though I'm not that much older than the kids, and Priya, Evan, and Kiara are close to my age, which is awesome."

"Yeah, we're friends. Kiara's really sweet, but she's super duper shy. She stutters a lot talking to people she doesn't know, but Evan, Priya and I are working to help her with that."

"My friend? Oh, his name is Pyrite! Ephemera rescued him and a ton of other undersea creatures from a pair of poachers in the reef, and he followed her home. She’s already got Gale so she introduced us and we hit it off. Pyrite’s great."

"Why Pyrite? Well, that’s the name for fool’s gold. And those two poachers were certainly fools...not to mention cowards. The face of a coward really does look like the back of a head."

"What I like to do during my free time? I like sports! Beachball, volleyball, balloon ball, the whole nine yards. I have swimming races with everyone too - Faolan and I race a lot too, her on the beach and me in the water. My friends and I play all kinds of other games, like freeze tag and Marco Polo, but everyone knows not to touch my tails, because uh. I sting. Pyrite plays ball with me too, I taught him how! It's really fun, even if Evan kind of really sucks at swimming. Um, aside from that, I really love listening to elder Zinnia’s stories; she’s seen and done a lot during her career as a warrior. Not just her stories either; if you’re willing, I’d love to hear yours as well."

"Yep, Oceandome born and bred. I’d have quite a hard time anywhere else, now wouldn’t I? Ouroboros is great in that it has land and water roads so people like me can be as much a part of the town as everyone else. Not mention Sora's houses! He builds aquatic versions that have a basement floor, which is filled with water up to a platform a step down from the front door. It's as wide as the front side of the house, and is big enough to count as a small if rather wide room. It’s wonderful."

"Well it was really nice to meet you, but I was actually making my way out to sea to gather some materials Zale’s running low on. You should go say hi to him if you haven’t already, he’s great. Hopefully you’ll still be around when I get back; I’d love to hear your tales. Until then, goodbye!"