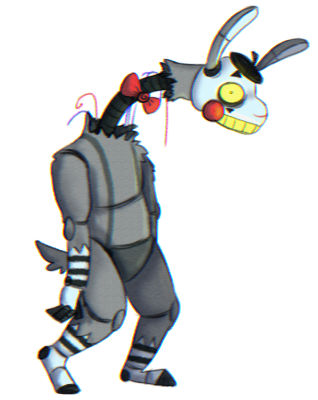 Based in the FNaF 2 location, acts as an obstacle like Balloon Boy by closing off one of the vents thanks to their long neck. If this happens, the other animatronics show up in the other vent at least twice as frequently, Llewellyn can be deterred by repeatedly flashing the torch in their face after which they'll go back to their original spot.

Llewellyn is supposed to be a mime, so they won't make any noise outside of the vent crawling. Will change poses each time you look in the camera, when they're about to crawl in a vent they'll mime a basic "you're dead" action.