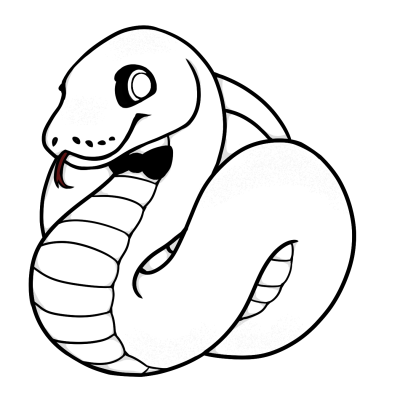 *You're wandering among the trees, hunting for steel, when suddenly something hisses.

Oh dear! You've stepped on somebody's tail! Scrambling back frantically, you realize you've trodden on the tail of a rather large leucistic snake.

The snake turns to look at you, but he's not as upset as you feared he'd be. He smiles ruefully and coils up some, so as not to be stepped on again.*

Keke... Don't worry about it. That happens quite often, see... And I've never been offended at much of anything. But it's always a pleasure to stumble upon new folk. Even if the case is more along the lines of, 'being stepped on'. The name's Percival, but most people call me Percy. I'm the White Monarch in Sallentine, but here my title is supposedly "Prince of Noodles".

What am I doing out in these woods? I was actually on the way to visit a friend of mine. That's why I'm here and not in Sallentine, after all. Koa's not taken too well to Wykin dragging him all over the place. He came home a few weeks ago, petals frozen stiff. Tiger Eye Peak seems rather brutal. Hopefully we don't end up going there. Again.

Oh? I know I don't look right. I'm missing my top hat... Sakura took it before I left.... The Jade one? Aha, no, mine's white. Little Azalar gave this one to me to wear in the meantime. He said he'd gotten it from Ms. Zinnia. Strange indeed that a lady should wear a top hat. Unless you're Sleepwalker, of course.

Ahh-?! That's rather rude! I know my eyes are strange!

Of course I'm not going to tell you the story behind that, it's none of your business!

Who is Sakura? Don't you know anything about Sallentine? Before everyone else came along- Koa, Gloria, Tycius, Espen.... That whole crowd? We were here before them all. Sakura and I are literally Original Sallentine. Thankfully, things are different now. No.... She's my girlfriend.

Why would I want them different? Well... For reasons that don't concern you, really.

I uh.... Should probably get going... Koa's probably wondering what's keeping me...

*Percy slithers away before you can ask more questions. Strange. Did you upset him?*