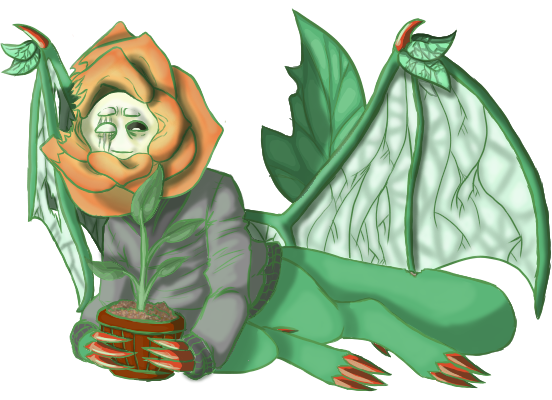 *Wow, what a cozy-looking garden! Somebody's certainly done an expert job with this. But you're nowhere near th Rose Palace, whose garden is this??

Your question is answered as a Rose taps on your shoulder. You turn to face him, and jump.

The Rose towered over you- was it normal for a Honey Glider to be that big?! His face didn't look like it was in very good condition, either. He had scars all over, and irritation was written all over his face.

You know you're tresspassing, right? What are you doing here? ...Passing by? Suuuuure.

I'll bet you're jus- huh? The garden? It's mine and Anna's, but Anna's never really around to do much with it. And it's also none of your business.

I-- Complimenting me isn't going to distract me from the fact that you're tresspassing. Okay, yeah, cool. 'Nice garden'- I get it. It's what I do for a living, what did you expect?

Before? That's still not your business. You best leave before I make you.

You really want to bug me, don't you? Why is that?

"Getting to know people"...

Fine. If I talk to you for a bit, will you leave? Yes? Deal, then. That way I can honestly say I didn't beat the daylights out of you.

Wait... Why did you come here to ask me about other people? No, no, don't get me wrong, I dont' really feel like talking about myself, but you're pretty odd to be getting to know people like that. Seems creepy, if you ask me.

So.... Anna, Anna.... WHAT? PFFT, no I don't like her! Just because I live with her doesn't mean... Hffffhfff. Pal, I'm ace. I don't like people, anyways. Besides, that vixen'd slap me senseless if I dared make any moves! We're just friends.

Aranova, though, haha! The guy's helpless, head-over-heels for her. He doesn't really get much time off, though. Always out and about hunting souls down. I kinda feel bad for him, even if he was hostile to me for the first few months. I do owe him, though. Anna wouldn't have shown up if it weren't for him.

How long? Well, I've spent.... About a year or two working in this garden, I think?

*Honey blinks, hesitating. It seems it occured to him that he was pretty rude to you earlier.*

I, uh... I'm sorry for snapping at you earlier. I don't exactly win citizen of the year awards. I always think people are out to be cruel... But that's not the case.