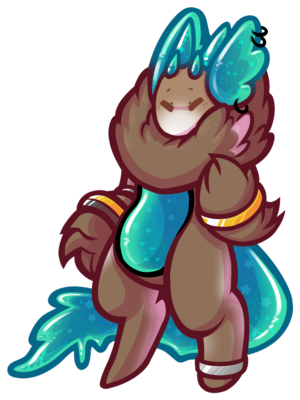 Espen is infected with Vampirism. Symptoms include craving blood, sensitivity to sunlight, an allergy to garlic, and changing into a bat after especially forceful sneezes. If they start to sparkle, immediately consume a Golden Apple to cure the infection.

*It's a beach alright, but not the kind you'd hoped it'd be. The sand was an eerie grey, full of smooth pebbles. So much for sandcastles... At least the water is clear and the sun bright.

Waves crash on the beach, and you notice a blue and brown figure bobbing among them. Light glinting off the figure's armbands blinds you for a moment, but you make out a person.

Intrigued at why anybody would want to be in the water here of all places, you go to the water's edge.*

*Given his heavy accent, you're afraid for a moment he's going to speak full-blown Spanish to you. Thankfully, he seems to know English.*

What brings you out here? Most people don't like the sand here, or the water for that matter since it's so cold. There's a... Ah, what would you call it? A place more suited to vacationers south of here, if you're looking for a prettier beach. I personally, like the change. Silver Beach is wonderful, but feels small and overrated after a lifetime of surfing there.

Mm? Silver Beach? It's a city, from the Onyx kingdom. In Sallentine. Nice little tourist hub.

Yes, I come from Onyx kingdom, how could I not? I am their Monarch. Espen Syxth, if you will.

*Espen smiles, dipping his head. You realize he might have bowed if he weren't balanced on a yellow and green board in the water. How does he stand the cold...?*

Oh, so you've heard about the whole Honey fiasco? I'll be honest with you. I don't really trust that Rose, but at least we worked something out for the poor guy. I get it, he's got issues, coming from that lab down in LK, but that's no excuse to terrorize innocent people. But, as long as he never comes back to my kingdom, I've no problem with Honey.

Hey- while you're here, have you happened to see another person of my kind? Her name's Panjou, she's much smaller than myself and has darker colors and a soft fuschia belly. She's supposed to be in Sallentine right now but the poor girl seems to have separation anxiety. Convinced I'll get myself killed some way or another. I'm hoping she hasn't tried following me away from the manor.

She likely won't wander on the beach, anyways, aha.

Panjou would never get her fur as wet as yours is about to be.

*Espen chuckles softly as you tilt your head, still confused, before a freak, ice-cold wave crashes up to your knees, effectively soaking you. Ahh! Now you have to go home and dry off...*