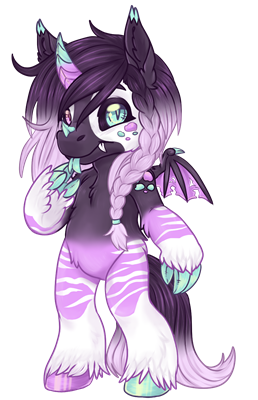 Lusaire is infected with Vampirism. Symptoms include craving blood, sensitivity to sunlight, an allergy to garlic, and changing into a bat after especially forceful sneezes. If they start to sparkle, immediately consume a Golden Apple to cure the infection.

Lusaire is my fursona! He's a unicorn/dragon hybrid with okapi markings. He's mysterious and cool on the outside, but under that facade, he's just a sarcastic nerd who has a difficult time understanding jokes. He's based pretty heavily off my own personality and experiences, but obviously I'm not actually a draconic unicorn so he's way cooler.

A few things:
+ Lusaire's blacksmith career is actually in character. I'm a fabrication welder (certified in three processes) and an artist blacksmith (coal/wood forge) on the side, so I thought it'd be fun for him to also be a metalworker.
+ On the other hand, his vampirism isn't really in character. I just happen to be a big vampire fan so I left it instead of curing it.