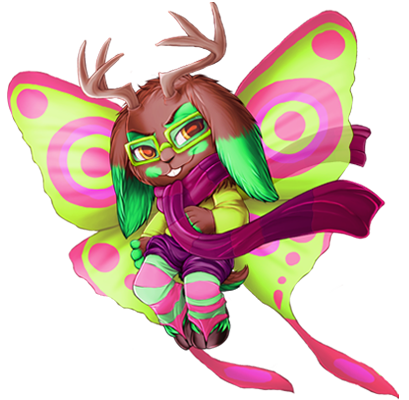 Warden appeared alongside Garrett when Warden was just a small bunny. Like most of vaer other housemates, nobody knows where Warden came from, other than it was likely the same place Garrett originated from. Despite being two completely different species, Garrett and Warden are regarded as siblings.

Always adventurous, and quick on vaer feet, Warden spends of of vaer time wandering around the wilderness, sometimes gone for days or weeks at a time. While Sitri occasionally accompanies Warden as a bodyguard, most of the time, Warden is alone, dodging monsters and vicious plants by vaerself.

Vae spends vaer home time either snuggling with vaer boyfriend, Deniz or playing pranks on the residents of Dragonsmaw. Nobody knows why such a plucky and naive character picked such a place as Dragonsmaw to live, to be honest. But now most residents know that when Warden is near, something will go wrong in the most hilarious fashion.

Occasionally, vae visit vaer other boyfriend, Frisk. Deniz, Frisk, and Warden are happily in a poly triad, and enjoy getting into mischief together.

I like to roleplay, but I'd rather do it in forums or PMs! Ping me if you wanna play. :3