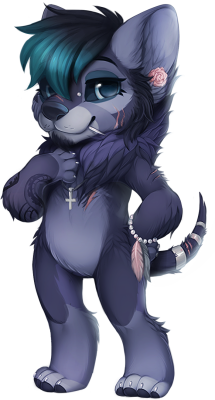 Hirst is a professional tattoo artist who works at Kerberos's tattoo studio. He specialises in Japanese blackwork. He's an apathetic and sensitive soul with a troubled past and demons he's still fighting. He has an impressive knife collection. He carries his favourite and still often gets in knife fights, hence the scars.

He loves Ryden deeply and considers her his saviour; a guardian angel to cheer him on, heal his wounds and the only one who makes him feel worth something. Since quitting smoking he has developed a compulsive chewing habit, and is often chewing a toothpick - If he doesn't have a pack of toothpicks on him it'll usually be his hoodie strings or headphone wires (he has to buy new ones often). He mostly listens to Nirvana, Korn, SOAD, Gorillaz and Slipknot.