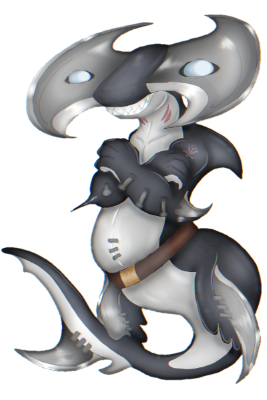 Amerin is infected with Vampirism. Symptoms include craving blood, sensitivity to sunlight, an allergy to garlic, and changing into a bat after especially forceful sneezes. If they start to sparkle, immediately consume a Golden Apple to cure the infection.

A fat dummy who talks too much. They always seem to have enough time to go around and look at things and talk to people. They're close friends with "Walter", who they often argue with over Amerin's bad eating habit.

Walter has recently acquired some kind of ailment from something they supposedly consumed, but Amerin seems oblivious to this. Somehow, the shark had convinced their friend to take up the job as a Warrior alongside being a Construction worker {though Walter clearly doesn't like fighting or killing monsters}.

Amerin is aware of Walter's current problem {they are stuck as a "Shifty"}, but had said that they think Walter looks cute as a weird little "caricature" of an animal. The shark had meant this in a sort of endearing way, which seemed to help Walter feel a little less worried about how they look.

{ My first Villager. Though I may have another Villager as my "main" someday, Amerin will always be the OG. }