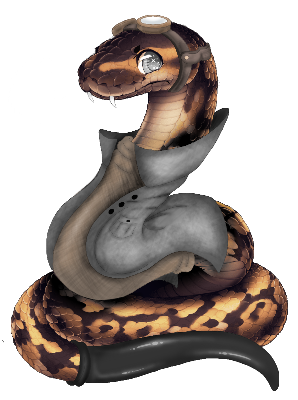 If he were a duck, he would certainly be called a quack-doctor.

Belhor is a somewhat old snake {if he were a dog, he'd have a number of grey hairs on his muzzle...} who practices and experiments with who-knows-what in an icy dungeon he himself carved out. Nobody knows how he was even capable of doing such a thing without hands or legs, but it's best not to question it due to there being no exact answer.

After a long time of collecting "Quest Shards", Belhor has finally acquired a Shifty Morphing Potion Recipe. The cost of making a potion, though, is another problem.

Instead of wearing a normal labcoat, he wears one made of wool, due to living in a cold climate (and that certainly isn't good for a cold-blooded animal), and wears a cashmere sweater beneath that just to be safe.
Because he has no hands, he uses his tail to hold things, such as vials or bottles. In case he ever spills a potent liquid on his tail, he made himself a "glove" to prevent that, though it does look a little silly on him. Belhor keeps a pair of goggles not only for when he's performing alchemy but also to protect his eyes from the sun and / or wind.

Though he always seems to be dismal, in reality he's just hiding his emotions. You wouldn't be able to tell whether he's happy or irritated...well, you'd be able to tell the latter though, because he'll show it by the look on his face.

Belhor is "friends" with a strange rabbit / kangaroo-like creature who calls himself "Gatsby." He isn't sure where this "Gatsby" came from, but invited him to stay at his residence, where he now resides for the time being.
Unbeknownst to the odd creature, Belhor keeps a "log" of information regarding him.

Thanks to...whoever had left me that potion. I do not have any "lab rats" to use it on yet, but I will hold onto said potion until I find someone "eligible" for it's use. I appreciate it, stranger. -Belhor

We have a new "neighbor" here. I'm sure they'll make a perfect test subject for the Shifty potion anonymously given to me. -Belhor

"Fun" Fact: This character is named and partially based off of another one outside of this site.