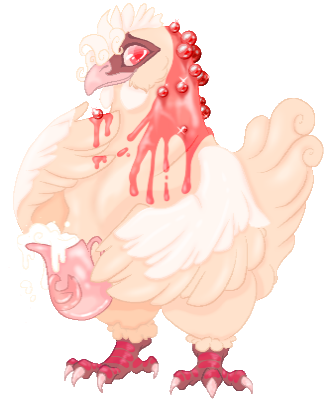 Pumpkin is a bit like a doting mother, despite having no children to care for. If she sees someone cold and alone outside her house, she won't hesitate to bring them inside and cook something nice and warm for them.
She's rather quiet, but does speak in a sweet tone of voice. When she's mad, though, she's crazy. Her feathers puff out, stretches her neck like a ostrich, and lets out the most ear-splitting screech you'd ever hear from a bird. Luckily she rarely ever get's angry.

There is a Villager named Walter she visits. Every Sunday she goes to their house and brings them a Squeakherd's Pie {despite Walter's polite declines, she insists that they take it to "help with treating [their] sickness". Pumpkin feels sympathetic toward them, and tries her best to improve their health.

{ Made because I love chickens. They've been a part of a majority of my life up until now, and I love my little chooks. }