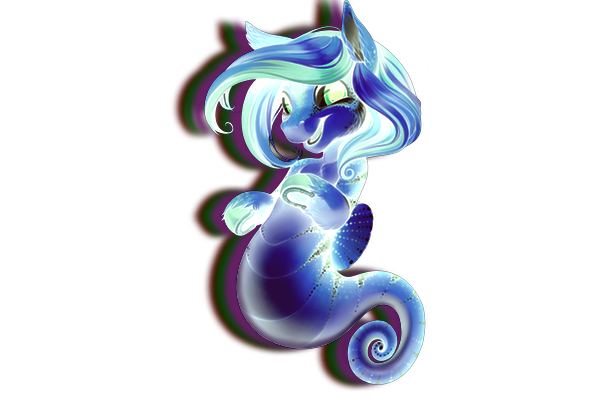 Canon:
You head into the village, following your ears to the source of the singing. You reach your destination, a small house on the very outskirts of the village, with small ice covered trees surrounding it in a thin ring, the cold waters of the river lapping at the dirt underneath your feet. A horse is sitting in the water next to the house, humming to herself. She turns to look at you, and you shiver. Something about her seems off. Then it happens.
She drifts out of the water, parts of her passing through the ground. She has the bottom half of an eel. She glides towards you, and you back away as she reaches for you, little wisps of fog curling off of her hooves. "Hello..." she whispers, stopping. As if she were frozen. "I have... been waiting... for visitors." She stops moving, and you notice that there is ice spreading around her tail. Her speech is halting, as if she hasn't spoken for a while, or her jaw is stuck. Everything about this horse seems empty and bleak.
"I am... The Singer... I do not... remember... my own name, it has... been so long..." She turns to look back at the water, and the trail of ice that has followed her. That feeling of complete unease returns, and you slowly back away as the singing starts again, the shadow of a glitch appearing behind her, grinning, watching.

Noncanon:
The Singer is basically the messenger's messenger. She is given items (by Azrael), to hand out to random villagers from around the site. Usually this runs with the Latest Paintie, but sometimes it goes off of a character who's caught her attention, or someone who's done something nice.
She's grumpy, usually yelling at Azrael when she gets dropped somewhere (even though she can't hear her)- or using her Glitchy magic to cause havoc around her. Other than that, she's kind, and cheerful once you get to know her.