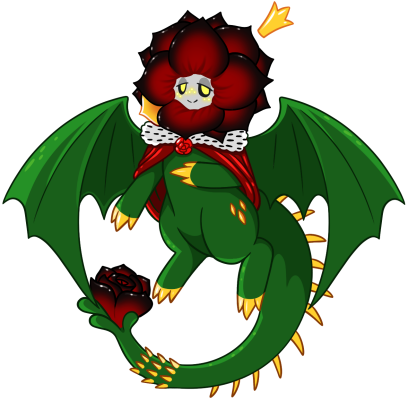 Koa, King of Roses is infected with Vampirism. Symptoms include craving blood, sensitivity to sunlight, an allergy to garlic, and changing into a bat after especially forceful sneezes. If they start to sparkle, immediately consume a Golden Apple to cure the infection.

*You wander through a massive library, mouth slightly agape in shock at how many books were here.

You can hear somebody humming not too far away, so you decide to go see who it is.

You find a reading nook by the large windows, and realize that the person humming was a Glass Rose! They're wearing a crown, so they must be royalty, right?

The Rose jumps some as he finally notices your presence. It looks like he was reading something, because he shuts a book before setting it aside.*

Oh dear.... I wasn't expecting any visitors today... But that's alright! It's always good to see new faces around here!

I am Koa, King of Roses. You may have heard of me- I serve as the Rose kingdom's Monarch here in Sallentine.

What brings you here? Hopefully not to tell me a certain Wickerbeast has gone missing again... You see, ever since I visited this lovely island in Oceandome, a young wicker by the name of Azalar took quite the liking to me, it seems. He comes here often to follow me around.

And sadly, sometimes he likes to sneak off on his own to try and see me. Trust me, it isn't any fun trying to get him back home, but at least it wasn't as bad as the time he gave me the slip and ran off to Death-Trap Falls. Alone. Ah, kids will be kids, I suppose.

Oh, the other Monarchs? Well, Tycius still hasn't come around yet, and Espen's still trying to get used to the place, but Percy might be up for some chatter. He's quite the guy- knows far more magic than me, and that's saying something! However, he's not nearly as strong as he is in his real form...

What?? Of course he's not really a snake, what in the world made you think that??? No, Percy's human. He just hangs out around here in that form, says it's easier that way.

Ah, the garden. Yes, I've been taking care of it since I could carry a watering can. The books in the library have helped out a lot, too. There's so many things you can learn in a place like this.

No, it's not a rumor. I actually did meet my wife in a library. This very one, in fact! Percy says it's absurd, but I wouldn't have wanted it any other way.... You want to meet her? Oh, I've no idea where she is right now. Probably trying to get rid of my pillow hoard again... I could never get mad at her for it, though. As determined as Gloria is to brown my petals early, I'd be nothing without my queen.

The Sleepwalker? You probably know her as Wykin- that's her 'first name', but most of our world only knows her by who she is. The Sleepwalker. Wykin made our world- I may disagree with the things she does, but I have to be grateful for her. We wouldn't be if it weren't for her. I suppose she just gets... Bored, sometimes. I guess that's one of the woes of being immortal.

In all honesty, perhaps it'd be best if you run along, before she attempts to drag you into her antics.