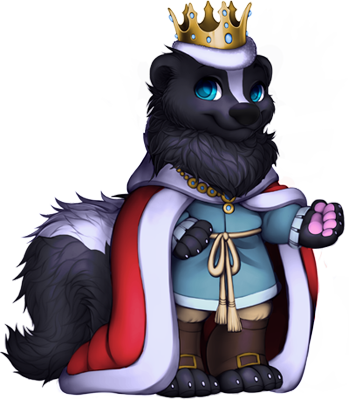 Base by Florakoko
CSS by CafeiGoatz
Name: John
Age: 55
Career: Farmer
Favorite Color(s): green and gold
Likes: tending to the seedlings, harvesting from the orchard with Xander, taking care of things, children, and reading in the library
Dislikes: reminders of his failure as a king, accidentally killing the very plants he's caring for, demons, natural (and unnatural) disasters, and curses
Favorite Food: Cranberry Crepes
Hated Food: Chester’s Blood Orange Cider
Other: Herbivore, Toyhouse

Letting yourself into the orchard, you see a skunk carrying a basket on one arm, plucking berries from the berry bushes. He carries himself like royalty, with both a crown of gold and diamonds on his head, and a royal cloak around his shoulders. And yet, underneath that, he wears the humble clothes of a farmer. How strange.

It's not long before he notices you staring, and comes over to say hello.

"Good afternoon, stranger. Might I ask you for your name?"

The skunk smiles at hearing it.

"That's a fine name. My name is John, and I'm a farmer here in Ouroboros."

"No, not an herbalist. Camellia and Kiara work a different, but similar, job. No, I take care of the graden and orchard along with Xander, the resident spirit of summer."

John chuckles at the look of surprise on your face.

"What, did you think we simply ate the reagents our herbalists grow? Or imported everything? No, we're rather self-sufficient, here on this island."

A despondent looks enters John's eyes, and he sighs quietly.

"It's a reminder, of my homeland, and my failure to protect it. I...didn't aways use to be a humble farmer. Once, I was a king."

"Yes, a king. The ruler of a kingdom far away, across the sea. A kingdom that, much like Anubis's and Amun's, exists no longer."

"You want to know what happened, huh? Well, it started out small. Crops weren't producing as much as they used to, and were even beginning to wither and die. We thought it was just a bad season, but it only got worse from there. Food we had in storage rotted away, water became tainted, and minipets the land over keeled over and died...it was anarchy from there. The people blamed the nobility for these disasters, and rightly so. I didn't know it at the time, but my council of wizards were conducting rituals in secret, leeching the life from the very land to empower them with immense power and immortality."

"By the time I realized what they were doing, it was too late. My people were at the castle gates, besieging the seat of power in the kingdom, and my captain of the guard and I burst into the council room, seeking help from my council. Imagine our surprise at learning what they were really up to, and that this entire plague was entirely their fault. That they broke their very oaths to serve the people and king in their lust for power."

"We were outnumbered and overwhelmed, though we made them work for it, he and I. Three of the five lay slain on the floor, along with my...along with my captain. The two remaining were about the use the blood and loss of life to make themselves unstoppable, and I did the only thing I could - weakly outstretch my paws, and smash the most important-looking thing there was. The wizards cried out in alarm, a white light overtook my vision, and then nothing."

"When I next woke, it was in the utter ruins of the castle - one that had been reduced to nothing but rubble. Panicked, I raced outside, only to find everything dead - the grass, the trees, the people...all gone. Nothing had been spared; not the minipets, not the insects or small animals, nothing. Not even the structures had survived, instead finding themselves as naught more than collapsed stone and wood."

"I, I ran from there, desperate to find something, anything, that had survived. Nothing had. I was alone in the ruins of my kingdom; a kingdom of naught but death."

John takes a breath to center himself.

"As I wandered, drinking tainted water to sustain myself, I wondered. 'How could I have let this happen? Why was I the only survivor, when everyone and everything else around me had been destroyed?! Was it to witness my failure? To suffer, for it...'"

"I only survived because I wandered outside the borders of my kingdom, where the death abruptly ended, and the land was healthy and thriving again. I ate and drank like a dying man, hating myself for it. For not simply joining my kingdom and my people in death."

At your concerned look, John is quick to explain himself.

"Do not worry about me. It has been more than a decade since it happened, and living here has helped me heal, both in mind and in spirit. Where once I was a king, now I am but a humble farmer. Providing and caring for my new home in the ways I can. It's...nice, here. Vibrant, thriving, alive. Nothing like the kingdom of ash and ruin I left behind."

"The people here took me in, and helped a broken king piece himself back together. Helped me see that there was still value in my life, that I should keep living for my people, for all who had died. Shiloh, Shiloh has offered to bring some of the ones I lost here on the Day of the Dead, but...in truth, I cannot face them. Not yet. Maybe not ever."

John looks up to check the sun, before turning back to you.

"Now, if you'll excuse me. There's still much work to be done, and these berries certainly won't pick themselves."

Chuckling, John leaves you, returning to the bushes he and Xander had clearly cared for and nurtured. Leaving a story and a warning in your mind, and the echoes of a forgotten, dead kingdom. Actually, now that you think about it, he never did tell you what it was called, did he?

Maybe...maybe that was for the best.