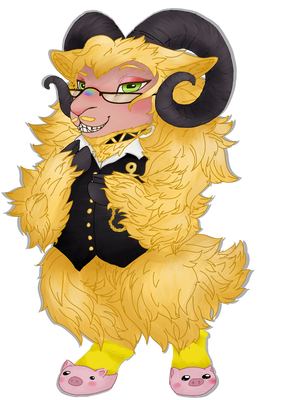 A fanmade student of Hope's Peak Academy belonging to the universe of Danganronpa 2: Goodbye Despair.
Gender:

Kazuki is a slender, golden-blonde young man with a well-kept mustache and goatee in a small ponytail, sharp, bright green eyes, and fairly flushed white skin. His hair is long, flowy, and unnaturally glossy, likely due to the arsenal of hair care and flame or stain-retardant chemicals he ritualistically drowns it in. He also wears a rosy shade of eyeshadow and blush, along with long fake lashes, and a rainbow patch of facepaint on his right cheek.

He has purposely applied a set of fake horns to his head with an indubitably strong glue, and under these horns he has two self-made bald spots just to apply them. He wears a pair of fashion-style tinted sunglasses, a few black belts or restraints with golden buckles on them, and a two-piece suit with some more golden accessories. Finally, with a stark contrast to the rest of his outfit, Kazuki owns a pair of Minions themed socks, and two piggy slippers, which he has a ferocious emotional attachment to.

Upon first meeting him, Kazuki acts rather arrogant, self-sufficient, and even-tempered. He often turns away or teases any prompting by the other students to interact with him. He is very focused on and secretive about his work, and tends to get agitated if the other students should pester him about it or accuse him of being "up to no good," hence his title, "The Ultimate Manhunter."

Once it is revealed that the students of Hope's Peak Academy are subject to a killing game, his ego inflates even further, and his focus switches to ending the course entirely. Once again, it is instantly assumed that Kazuki intends to be the first murderer-- But instead, he states that his plans are "To intercept the Blackened before they have a chance to strike!" He refuses to co-operate with any students that have similar plans, and acts overly suspicious of the rest of the class, quite literally stalking them about everywhere and scrutinizing their every move.

Generally, he is intensely annoying.

Other curious behavioral quirks he has include his large collection of stuffed animals, whether fake or taxidermy, cluttering his Dorm Room, his "secret style" of childish clothing, and his intense cowardice towards being retaliated upon or caught by the murderer. Also, if someone happens to dislodge his horns, he will immediately flee the scene (leaving the horns and whatever blood was shed from their removal on the scene) and disappearing entirely. If someone tries or succeeds to steal his set of socks and slippers, however, he becomes enraged beyond belief at the culprit, and may attempt to outright slaughter them to get his slippers back.

He has a flamboyant and proud walking style, and often juts his hip out to the side with a hand resting on it, the other gesturing profusely in the air while he talks.

Kazuki's Talent, the Super High School Level Bounty Hunter, is often the subject of much suspicion among the other students. Nonetheless, he is true to this title, and has as much skill tracking down people and animals as a bloodhound. He hides a lunchbox (once again emblazoned with a child's franchise, the Wonder Pets! TV show) within his vest, stocked with legitimate detective supplies, various stickers, and Looney tunes themed band-aids. He keeps his hands under his leather gloves intensely sterile-- They're permanently scarred and burned from being dunked in bleach, even after being lacerated. He has the capability to gather massive amounts of vital case information, but almost never shares it with anyone else.

Monokuma
In the prologue of joining Hope's Peak Academy, Kazuki seems okay with Monokuma at first, despite admitting that "This automaton running the place as a headmaster seems rather...... Fishy, don't you think? Wait, I don't care what you think, nevermind that. Pahaha." He proudly collects a small Monokuma-themed plushie and carries it around with him until it is announced that the bear is actually hosting a killing game with the students as the contestants-- In which case, Kazuki becomes infuriated and throws the plush to the ground in an outrage. He picks it up a few seconds later, only to assert that he is keeping it for "PURELY INVESTIGATIONAL PURPOSES!!!!"
Kazuki is intensely frustrated by the fact that Momokuma is a robot and much more difficult to track than a human being, and Monokuma himself seems to despise Kazuki's intolerably pesky nature.

The script for Kazuki's execution involves Kazuki being stripped of all of his clothes, dunked in boiling water and bleach, having them sewn back on into his flesh, and lastly, having his intestines sucked out with a vacuum to be replaced with polyester fabric. This is clearly intended to mimic his obsession with stuffed animals and taxidermy. Monokuma also seems to enjoy his execution at least 50% more than the other students'...

Hajime Hinata
Despite Kazuki's incessant arrogance and dismissal of any attempts to help his studies or pry information off of him, Hajime seems rather concerned for his classmate and convinced that he can negotiate with him for longer than any of the other students. This does not mean, however, that Hajime merely shrugs off his insults: Hajime has retaliated agains his rude behavior many times, to little avail, but Kazuki seems more mindful and sedated around him each time thenceforth.
Likewise, Kazuki seems to somewhat respect Hajime as a "Level-headed average boy" and has even attempted to flirt with Hajime at least 3 times throughout the entire course of events (in an incredibly insulting manner.)

Gundham Tanaka
With their similar traits of self-superiority, a love for small, fluffy things, and their astonishing level of eccentrics, one might assume that Tanaka and Tsuneo would become friends over time. In the course of Danganronpa V2: Goodbye Despair this dumb fan spinoff edition, however, this does not come to pass at all. Kazuki regards Gundham and his Dark Devas of Destruction as "Disgusting, filthy little garbage rats" that serve no purpose other than to "meddle with the crime scene and my investigations!" Gundham also displays utter distaste for Kazuki and his beliefs, commenting on how he "interferes cowardly with the cycle of predation for (Kazuki's) own benefit."


Mahiru Koizumi
At first, Kazuki seems entirely disinterested in Mahiru, and acts, just as he does with anyone else who does not engage in conversation with him, as if they were simply not there. Once he realizes she is recording everything that happens as the Ultimate Photographer, though, he leaps at the opportunity to steal "evidence" from her. Mahiru, of course, scolds him openly for this behavior, even with no evidence that Kazuki was the one smuggling away her pictures. Along with Hajime, Mahiru sides with the other students in defending against Kazuki's offensive statements, and Kazuki often loses arguments with her-- But he still refuses to return any pictures, even if they have no correlation to the crime scenes.

Nagito Komaeda
To put it frankly, Kazuki ABSOLUTELY HATES Nagito Komaeda without remorse. Komaeda's lax nature, inferiority complex, and especially his views on "hope" fuel an intense disgust in Kazuki's heart, and he often makes it a point that Komaeda is "The most USELESS little runt in the school" and "A pathetic excuse for a potential predator." He makes jokes about turning Nagito's hide into various articles of clothing and furniture, much to Hajime's dismay. Nagito, however, does not reciprocate all of this deep-seated hatred, and seems to accept the burning insults as if they were little pats on the head. Outside of Kazuki's presence, Nagito explains that he believes kazuki "Has so much more potential than (Hajime) and I here," but also remarks on his ill-mannered slap talk and how that, at the least, could be improved.

Teruteru Hanamura
At long last, in an ocean of angst and turmoil, we scroll to the bottom of Kazuki's Relationships page to find a single person in Hope's Peak that he sustains a friendly relationship with.
Kazuki and Teruteru start off on and remain on good terms throughout the entire plot of the spinoff. They are often found in the school cafeteria together, jokingly flirting with each other and discussing Kazuki's 'progress' in a "Top Secret Gay Code." Kazuki greatly appreciates Teruteru's cooking, and even turns any attempts to refer to Teruteru as a pig into a compliment, commonly gesturing to his adorable slippers in the process. In turn, Teruteru is very pleased to have someone around who genuinely appreciates his cooking and company, and plays along with Kazuki's shenanigans, despite Kazuki leaving him out of the vital roles in the investigations.

Yet to be discovered and written!