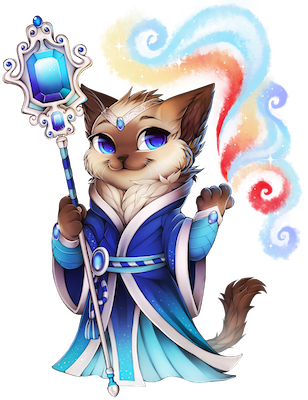 She harnesses the power of frost, and uses it to her advantage when in battle. She doesn't spare her opponents and leaves them in a freezing snowstorm. Winter hates fire, and heat. She can only be spotted during a intense, frigid blizzard. Some claim to see her, and she helps them get through snowstorms quickly and gives them food and shelter. However, she vanishes once they try to point her out. The only place you have a chance of seeing her is in the bitter, cold, dangerous depths of the mountains, in Tigereye Peak. Many have risked their lives to try and see her, and fail to do so. Forever lost to wander in the bitter cold.. She has defeated the harbinger 5 times.

CSS and bio is a WIP
Theme:

She was abandoned by her mother and father at a young age. They left her in the mountains of tigereye peak, leaving her to fend for herself. One day, she found a blue book while wandering.
This was no ordinary book. It was a spellbook. She read it and quickly learned how to fight and defend herself from monsters, since it was almost impossible to survive in the mountains alone.

But, even in the bitter cold of the mountains, she was left alone, with nobody else with her. She was lonely.. And a bit sad. She found a aerkit left on its own and kept it as a pet, but that wasn't enough.

The cat sighed, looking around the mountains. The peaks were jagged and sharp, and poked into the sky like thorns. Snow dappled her pelt and the aerkit beside her. Winter grabbed her spellbook, the pages were covered in a thin layer of ice. Her blue gaze inspected the mountains and then dropped to her spellbook. "It does get lonely here.." She sighed, closing the spellbook.

After a few days of traveling down the mountains and into the village, she tried to find her mother and father. Even though they left her behind on purpose, she still loved her parents, even after years of wandering in the mountains on her own. She asked the rest of the villagers where they were. Only one knew, and that was Romero.

"I'm sorry to say this... But your mother and father had passed years ago."
that aj video probably threw you off-