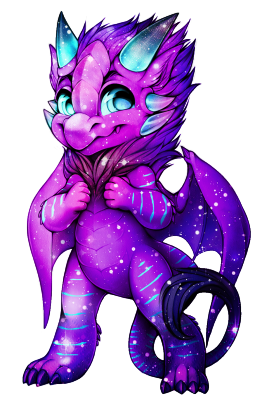 
"two dragons are playing together in the shallows of the beach, chasing after a beach ball. One continues past you in pursuit of the colorful ball, while the other slows to a stop, looking at you curiously.

"Who’s my friend? Oh no, that’s my twin sister, Caireann! We live here together with our dad, Ronan. He’s the sea turtle dragon, but just cause he’s blind doesn’t mean he can’t take care of us. He even beat up a nasty monster that went after the ship when we moved here, it was awesome! Dad’s the best."

"How do we all fit in our house? Oh, ours is like Zinnia’s - see the two two-story houses? Those are ours, cause we’ve got more people livin’ in ‘em. Most houses here are just one floor, and maaaaaybe a basement. Only Lazarus and Belphegor have those, cause Lazarus doesn’t want all his morphing potions cluttering up his house, and Belphegor keeps his hoard down there, cause he’s got a lot of stuff. If he just kept it in his house it’d be ten- no, a hundred times worse than my room!"

"No, my room’s not that messy. Only a little. Dad exaggerates, but it’s not like he can see it. Which is why he calls it a health hazard...and always comes in carefully so he doesn’t trip..."

"Okay yeah, I should probably clean it."

"Yeah, we’re Caspian’s age. He and Lyra and Nocturne and Azalar are great to play with. We didn’t have any other kids our age where we used to live, even if Nocturne's not a kid, not really."

"Where was that? Oh, an underwater village some ways away from Oceandome. I like it much better here."

"Yup, I can breathe underwater! We all can. Momma could too, but she’s not...here with us anymore."

The little dragon looks saddened by this, and it’s not hard to put two and two together as to what must have happened. Surprisingly, his expression brightens soon after.

"But, but even though it sucks that she can't be here with us anymore, we can still talk to her! Shiloh lets us do that, and not just us either. He goes takes letters back and forth for us all. Did you know the letters from heaven are really weird? They're all soft even though they look like paper, and the ink is gold and kinda moves a bit! Like liquid sunlight! It's so super cool! And Anubis and Amun's friends and parent write on this really weird paper think, and in pictures too! It's so weird. Zihao's is normal, well, except for the fact that I can't read the language, which kinda sucks. But he gets to hear from his momma too so that's alright."

"The letters don't last long here, they kinda burn up and shimmer away, and Shiloh says ours don't really last long in heaven either. But! It takes like an hour so we get to read them and it's awesome."

"I get to hear from my mommy still...and on Halloween, she can come visit us and be with us the whole entire day before she has to go back."

"A-anyway. Um. What else did you wanna talk about?"

"My dog? His name's Triphazard. Go ahead and pet him, he doesn't bite. And he's a sucker for belly rubs. Not to mention constantly getting underfoot, which is why his name is Triphazard haha."

"Hobbies? I like stargazing! Az and I will sit out at night and just look at the stars. I’m so jealous that he can see in the dark, it’s so useful in making sure we don’t trip or stub our toes on stuff. That sucks."

Corwin's expression brightens, and a look of wonder grows in his eyes.

"But! Nocturne's taken me up into the skies before! Did you know there are cities up there? And stars are people, like Nocturne! And there's even more people up there who aren't stars but they live there too! It's so cool!"

Corwin is practically bouncing in excitement, before a colorful beach ball suddenly bounces off his head. He turns around angrily, rubbing the point of impact, and sees his twin standing a ways off impatiently.

And with that, the little dragon picks up the ball and returns to the game he’d been playing.