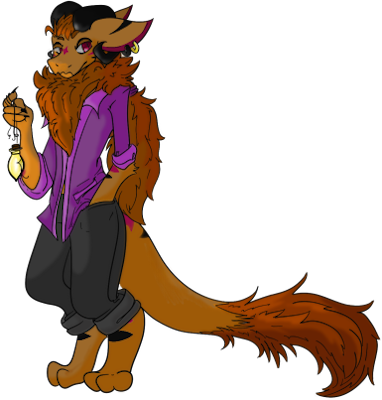 Aranova is infected with Lycanthropy. Changes into a beastly monster after exposure to moonlight or especially frustrating board games. Howling at the moon relieves the symptoms for a little while, but use a Golden Apple for best results.

*Well, this is a rather eerie part of the woods... Where are you, anyways?? Lost, it seemed.

You walk along aimlessly, mostly hoping to find a way out of the forest, when you spy a lone cottage in the distance. Oh, sweet! Maybe somebody's home- surely they could help you out!

Hopes high, you jog up to the house and knock. A ginger Dutch Ange- no, a Wickerbeast... Both? A Dutch Wickerdragon answers the door, looking mildly surprised to have visitors*

A visitor? How in the world did you get lost here, of all places? And never once see a Fire Spirit? Don't give me that look. I know who has and who hasn't just had a recent run-in with those monsters.

Oh, you thought I was talking about the minipet, didn't you? No, I'm refering to a much more violent Spirit than those little guys.

Why do I care if you're lost? Because I'm the one who has to come get your sorry soul if you die out here. I'm the Soul-Keeper. Y'know... Aranova? Ah, forget about it.

Anna....? Normally she's busy doing things for the Sleepwalker. We don't really get to see each other too much... I haven't seen her for nearly a week, unfortunately. A shame, too- I've been trying to work up courage to ask her out, but something about that woman is just... Intense.

Thankfully, Honey's not as bad. N-not to say that Anna's bad- she's a cool chick- but Honey's been pretty chill here lately. He used to be a downright jerk to anyone and anything, but ever since he moved in with Anna, he's been doing a lot better. Still gets snappy and cusses you out in German every now and then, but hey. Nobody's perfect.

Richard? He's pretty busy with OK shenanigans at the moment, but he'll be around at some point. He's absolutely the guy you'll want to see if you want to spar. Or, y'know, chug some hot sauce with, haha...

So, it's back to my job, now, huh? Rather nosy, but alright. When a person dies in Sallentine, it's my job to go collect their soul and bring it to the Hall of the Remembered. I live at the Hall and watch over the souls when I'm not out hunting down idiots who got snarky with the Fire Spirits.

I don't really enjoy it much, but Sleep assigned me to the job, so here I am. Enjoying the lonely life. Not.

You want to see the Hall? AHAHA! You're joking. Unless you've got family or friends there- which I highly doubt as I've never seen you- you've got no business back there, buddy.

Yeesh, though... Koa does visit a lot. I can't really blame him, though. His momma didn't go out pleasantly, and I hear he had to watch her die. No, don't go pestering him about it. He'll have a fit if he knew I told you.

You want to leave already...? Aww. Shame. I was rather enjoying the company. Welp. I'm not one to keep you here. I'm not Percy on bleach, I won't tell you what you can and can't do... Head east out of here, and you should be out in a decent amount of time. Shouldn't really have trouble with the Fire Spirits, either.

Just watch out for that Dog, okay?