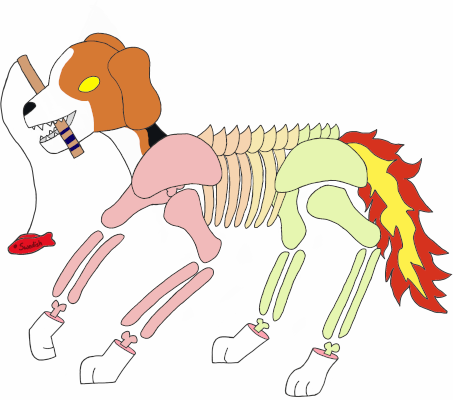 Venturing into the forest covering the majority of the island, you come into a clearing that holds a very colorful dog and a faegon playing together. Just as you realize that something is very wrong with this dog, he lifts his head and notices you standing there.

"Oh hi! Sorry, I didn't see you. What's your name? Are you visiting? Are you liking Ouroboros so far?"

"Aha, sorry. I just get a bit excited meeting new people. I'm Shiloh, and this little gal is Tootsie-Roll. Pleased to meet you!"

"You don't know what Samhain Spirits are? Yeah, I get it. Not very many of us leave the haunted woods in Dragon's Maw Manor that we call home. Nor are we seen all that often - typically just on Halloween, and at that point there's so many people and crazy costumes that we really don't get a second glance."

"Okay, so basically, we're Halloween spirits; a combination of a dog, a candy, a skeleton, and a ghost. For example, I'm a Swedish Fish Beagle - and you can guess what that means hahaha."

"Is that why I've got a fishing rod with a Swedish fish hooked on it? Yup! It's a part of me, just as much as my bones, fur, and tail are. I'd never lose it! No, seriously, I can't. Ever. And no, you can't eat the Swedish fish on here either. Like I said, it's a part of me - wood, fishing line, candy, and all. It's part of being a Samhain Spirit; I know a guy who has a giant peach ring around his neck, and another with a snickers label on his forehead. Like I said, we're just as much candy as we are dog, ghost, and skeleton."

"Yep, ghost. Like I said, we're spirits. We can very much go through things if we so desire, but where's the fun in that? Well, at least when we're not playing practical jokes, those are fun. And on top of all of that, we're loyal. We make friends for life."

Here Shiloh narrows his eyes, before half-snarling his next words in an ominous tone of voice.

"You hurt them, and you won't ever see the next sunrise, you got it?"

"A bit overkill? As if! Friends are important. And even if it was, which it's not, we're spirits. Spirits - and I mean all spirits - don't...exactly have the greatest sense of when we're taking things too far. Especially if we're not living among mortals. That applies for the pranks too, by the way. Heaven knows I've messed up a bunch of times, but I'm learning. And everyone's okay with that! They're great."

"What'll I do when they're dead and gone? Please, I'm a spirit, and a Halloween one at that. What, you don't think I can travel between this world and next on a whim? Cause I can. But just because I can doesn't mean I'm fine with my friends' lives being cut short. Just because I have never lived doesn't mean that I don't know how precious it is. And I'll not stand by and watch it be taken from them."

"Oh, oh yeah! Ronan's wife died a while ago, and he gives me candy to pass messages back and forth between the four of them! Same with Zihao and his mother, and Anubis and Amun with their friends too. It makes me happy, being able to do that for them...and get the candy, of course! I love candy. Too bad the letters can’t last long in either world, but hey, they’re there, and that’s what matters. And then on Halloween I even get to bring them over for a visit! It's only for Halloween, cause it's the day of the dead and stuff, and the veil is thinner then, but hey, it's still awesome! Some gods are more okay with it than others. I mean, Zihao's is all for it, while Helena's..."

"He's not. So I gotta sneak around him."

"What, you want to know if we're born in the other world? No, we just kinda...start existing. All of us came into being in our haunted forest, no exceptions, and that's all there is to it."

"You want to know what it's called? Uhhh...it doesn't really have a name. We just call it the haunted forest, our forest, or home."

"Oh yeah, we totally have villages and towns and stuff. Anything you can think of - from epic tree houses to living in giant, carved out pumpkins, or even just perfectly normal houses - it's there. It's pretty sweet, I'll tell you that much."

"Why'd I move here then? Well, for adventure, of course! After a while, never leaving the same ol' place gets pretty boring. I mean, our forest is huge, and full of great spirits, don't get me wrong about that. But I wanted to take in new sights, meet new people, you know? Be with mortals outside of just around Halloween. And you know what? It's been great so far. I'm sharing an island with mortals, spirits, demons, and the formerly dead alike. I love it here, man! There's so many interesting people to meet and all kinds of things to do, it's great! I couldn't ask for more."

"Anyway, you want to know about my hobbies? Well, aside from playing practical jokes, I love playing with people. Villagers, minipets, demons, monsters, the undead, whatever - everyone enjoys a good game. Speaking of which, do you wanna play? Come on, it'll be fun! Please? Pretty please with a cherry on top? Pleeeeaaaase?"

Shiloh's fiery tail is wagging hard. It's beyond obvious that he's really excited for the chance to play; the only question is whether or not you'll join him.