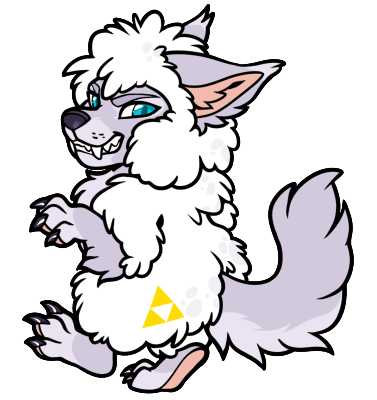 Morgan is infected with Lycanthropy. Changes into a beastly monster after exposure to moonlight or especially frustrating board games. Howling at the moon relieves the symptoms for a little while, but use a Golden Apple for best results.

Name: Morgan
Age: 16 (Former Life: 17)
Career: None
Favorite Color(s): blue
Likes: family, friends, the Legend of Zelda series (especially Twilight Princess), singing, helping others, and riding Epona
Dislikes: threats to his friends and family, not having food, being stranded. throwing up, and people seeing his death scar
Favorite Food: Cuttle Burger and Coral Fries
Hated Food: Eggplant, but will eat literally anything if he has to, eggplant included
Other: Omnivore, Toyhouse, abstains from Priest's Death by Mocha when he has the choice

As you walk down the road, one of the coral-wood houses has it's front door open, and out steps what you originally believe to be an incredibly fluffy bicolored wolf, but on second glance, is actually a wolf in sheep's clothing.

"Oh. hello! I wasn't expecting to run into a stranger here. Are you moving in, or just visiting?"

"Just visiting? Nice. Ouroboros is an incredible place, isn't it? And I'm not just talking about the scenery - the people here have been amazing."

"Why am I in- oh no, this isn't a sheep costume. This is actually wool, see?"

Morgan tugs at his fleece, and you realize that yes, this wolf actually does have both wool and fur growing on his body - except to your horror, you see thin lines were there isn’t fur; clinically straight scars forming the all-too recognizable Y shape of an autopsy. The edges are partially covered by wool, but it’s all too clear what it is.

But, it’s only an autopsy when performed on the dead - on the living, it’s a vivisection. Morgan notices you staring and winces.

"No no, it’s not what you think. I- just, when I died, it was during surgery to remove my pancreas, so they must’ve done an autopsy to figure out whatever went wrong and, well...I guess it carried over, for whatever reason."

"A-anyway, as for the wool, yep, it's a part of me. It's definitely weird. I mean, coming back as either a wolf or a sheep is one thing, but some sort of hybrid? Yeah, not what I was expecting. Though to be fair, it's not like I was expecting any of this..."

"What did I mean about be- oh. Right. Xino, Ephemera, and I are all, well, reincarnated souls, I guess. We were on our way to the afterlife, but I guess we got incredibly lost, because instead of ending up at the pearly gates or whatever the entrance to the afterlife looks like, we ended up reborn here."

"I know, it's hard to believe. Heck, I'm living it and some days I can barely believe it."

"Yeah, people come back in Dragon's Maw Manor all the time. I swear, there's something in the water there...anyway, they usually either come back as undead or are just plain resurrected or something, so this is rather new, even for Furvilla."

"What? You've heard about some people reincarnating? Huh. The more you know. That's...maybe we should try to find them. This isn't...the easiest situation to adjust to. And even though we've come back, we've still lost what we had. It's heartbreaking."

Morgan scratches the back of his head sheepishly.

"Well, why wouldn’t I be? This is a whole new world out here, with entirely different people, plants, and animals. Oh, some things are universal, but others...it’s just incredible. It’s a beautiful world we’ve been reborn into."

"Unlike Ephemera though, I need a charm of water breathing to explore the ocean. But the fact that I can even do that is mind blowing. I don’t know if you’d understand, growing up in this world like you have, but...trust me, it’s incredible."

"There was one time I was out exploring and ended up caught in a net trap. Nova had set it up to catch monsters, but uh, the bait is the kind of thing us explorers are out looking for, soooo...I got stuck. She cut me down, and we kind of hit it off from there."

"You want to know what my hobbies are? Well, I love to sing. Tienyo, Jörmungandr, Pikabolt, and I will often sing together. There's this cover of the Song of Healing that I absolutely love, and I'm also fond of the Wellerman. They're great songs. I learned the latter from Southpaw; he knows a ton of great sea shanties. Which makes sense, cause he's, you know, a pirate. He and his old crew sang them all the time. Nova's friend, Ripper, really loves them too, which is great. Pearling’s pretty fun too, like hunting for Easter eggs, but Jörmungandr‘s the one who’s really good at it.”

"Also, for the record, Whistle is amazing and I love it and hate it in equal measure. Love it because it's an incredible language, and hate it because man was it such a pain to learn. I'll also hang with my friends, and play all kinds of games. Aurora is more than happy to join in on the fun and games whenever she isn't on the battlefields. And she's not the only one; everyone here enjoys a good game of sport. There's also a group of us who get together to play video games; we're doing Mario Kart today and it's gonna be awesome."

"I have to admit, adjusting to a tropical climate was something new. Where I used to live, it was pretty dry and mountainous, so the heat and humidity was a real shock to my system."

"Oh no, I wasn't born on the island. My parents and I used to live on one of the beach towns to the east of the border of Dragon's Maw Manor and Olde Foxbury, at least until..."

"Well, they died. It was a monster attack, and they were one of the ones who didn't make it through. We hadn't had a problem like that before, but then there were just suddenly so many and we were overwhelmed. I got dragged off into the woods, but I managed to fend off my attackers. When I got back, though, everything was destroyed, and no one was there. I'm hoping everyone made it out, but..."

"I don't know how many others were dragged off like I was."

"I tried to find another town or village, but I was completely stranded. It wasn't until I bumped into Faolan in the Dark Woods that I finally was able to get back to civilization. Until then, I'd pretty much been surviving off whatever I could forage and hunt, while fending off any and all monsters - and people - who tried to kill me. The cursed forests of Dragon's Maw Manor are...not a kind place."

"I...was pretty much a poster boy for starvation victims by the time I was rescued. I was surviving, and wouldn't have died of starvation, but...I wasn't getting enough to eat by any means."

"Haha, it took you this long to ask about Epona? Yep, she's named after Link's faithful partner in the Legend of Zelda series. Man, I love those games, especially Twilight Princess! That one's my favorite. I’m really happy Imber loves the series too; it’s awesome to have someone to talk with about it. Or gush about it. They’re both true haha."

Morgan unlatches the door to the stable sharing a wall with his house, and the fysk freesian in question neighs happily, nudging Morgan with her nose in a display of clear affection.

"It's actually influenced how I see the world, too. It's an important lesson to learn, that light does not mean good, and dark does not mean bad. Balance is key, and moderation is important. I honestly think that's why I came back as what I am. I mean, yeah sure my mom was a wolf and my dad a ram, but normally I should've just been born as one or the other, like with Lyra. But I’m not. Half of me is a wolf, and the other is a lamb. Dark and light, mercy and viciousness; it's almost poetic, don't you think?"

Morgan falls silent for a minute, seemingly lost in his own thoughts, before he suddenly yelps in alarm.

"Nuggets! I forgot!! I was going out to mainland today and now I'm gonna be late! See you later!"

And with that, Morgan swings up onto Epona's back and the pair race down the road towards the docks with impressive speed. Even in his hurry, the pair are careful to make sure they don't bowl over anyone else also using the road - well, the land portion that is.