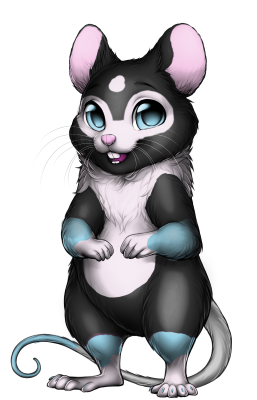 As you approach, Priya looks up from where she is doing backflips and cartwheels while a stray chow chow is rolling around in her general vicinity.

"My pet’s name? Isn’t she so fluffy and cute? Her name's Karma - go on, say hello, give her a pat! She looooooves that. Isn't that right, you doofus?"

"Oh, I was born in Tiger Eye Peak, but for personal reasons decided moving here was good for my health. I kinda tend to wander a lot; I can't seem to sit still. Zale likes to joke that it's cause I’m trying to find my misplaced sense of direction, which, rude. Speaking of which, he didn't stick another 'kick me' sign on my back, did he? Or an 'if lost, return to...' one? Can you check? No? Good, I don't have to punch him today."

"Hobbies? Well, I really like to travel, and see all kinds of new places. Acrobatics and tricks, too - I was part of a circus before I settled here. They’re called the Midnight Stars, you should go see them if you have the chance! Acrobats, animals, fire-breathing, manti-taming...you name it, they’ve got it! Working with them was so much fun."

"I’ve also taken up painting recently, Tasha's been teaching me, but I’m not very good at it. She's got the patience of a saint, I swear. I want to be able to preserve all the sights I see on canvas, so I'm practicing hard. Then there's playing with my dogs, I really enjoy that. And dogs, if you treat them well they'll follow you to the ends of the earth and back, you know? That's how friends should be, too."

Priya beams at you.

"And I've got epic friends! Evan, Aurora and Kiara are great to hang out with, even if Kiara is incredibly shy around strangers. She stutters a lot when she's scared or around people she doesn't know and stuff, but Aurora, Evan, and I are helping her work on it! Just like we're helping Evan get better at swimming, I mean he sucks at it!"

Priya laughs, before giving you a wide, beaming smile.

"Don't worry, we'll make sure he can take care of himself in the water, and that's a promise! Friends always got each other's backs."

"How am I an apprentice explorer? Well..."

"I’ve got a lousy sense of direction, remember? I won’t let that hold me back, but until I learn the area well enough to always be able to find my way home, I have to go out with somebody instead of on my own."

Priya scowls, clearly unhappy with this.

"I’ve been making good progress, and it’s not like explorers don’t get lost too! Even if Evan's had to bail me out a couple times, scrying where I am so the others can find me..."

You can’t help but ask why she has to learn the area then, if she’s supposed to be off exploring the outskirts.

"Oh, no, it’s uh...it’s just the immediate area around the island, and a little bit beyond. Just so that when I see it, I know where to go to get back home. I can’t always just swim up to the surface and cheat, though that’s a great strategy too. Ouroboros is kinda hard to miss in the open ocean. We’re the only island around for miles."

"Oh yeah, you bet the other explorers here do the same."

"Anyway, I’d like to get back to practicing - gotta keep my skills up, or I’ll get rusty. Unless you want to join? No? I can teach you from the beginning."

"No? You sure? It makes for great dodging and agility practice too. I’m super hard to catch in the water, and in games!"

With that, Priya gets back to her acrobatic activities. After watching her do several flips before intentionally ricocheting off a tree to perform a handstand spring to land on her feet, you decide to leave her be.