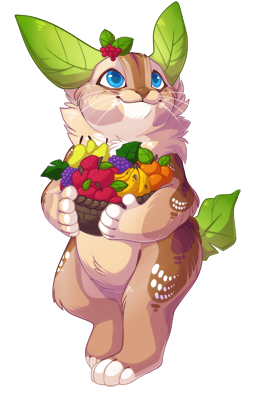 Walking down a road leading deeper into the forest, you realize that there is a fenced-in grove of fruit trees the road is leading to. You can see a feast rabbit happily picking cherries up in one of the trees; you take the opportunity to get their attention by calling out a hello.

"Oh? Hang on just a minute, lemme get down from here. Basket's about full anyway."

With that, the rabbit swiftly but carefully clambers down the cherry tree, setting his basket down next to three others by the gate, each filled with a different fruit. There is a green frog sitting on a rock in the middle of all of them, happily croaking at his return.

"The name's Xander. What about you?"

“Oh, this little guy? His name’s Greenbean; he likes sitting around the fruit and catching the bugs that try to go for it. Win-win for us all, right?”

"Oh no, I don't own the fruit trees. These are communal, really. Ouroboros grew them in about ten seconds flat. I'm not the only one who harvests the fruit, but I do do it the most often. I'm a summer spirit; the fruits get bigger and more plentiful from my influence."

"Surprised? I bet; especially since I'm sharing a town with two other seasonal spirits; a spirit of winter and a spirit of spring. What you've got to know is that we're not enemies or rivals or anything; we're just change. Winter creeps in on the tail off fall, and spring arrives to chase the winter frost away. That's really all there is to it."

"What do I do? Well, summer spirits influence the harvest. Fall spirits too, but we affect different things. After all, some things are in season during summer, and others in fall. So it's not like it's a blanket influence or anything."

"The greenhouse? Oh no, Camellia and Kiara grow reagents and stuff, though I do help out when they need it. No, I'm in charge of the orchard and garden here."

Xander points over to the side, where you realize there is indeed a garden full of plants growing. They seem to be mostly fruit and vegetables; those that come into season during the summer.

"It's hard work, but pretty rewarding. I love it."

"Oh no, we don't just eat whatever I grow here. We eat fish and monster meat too."

"Hey, don't make that face. You can't knock it till you've at least tried it once!"

Xander lets out a laugh at that. It sounds like waves lapping the shore and the crackling of flame. Two very different things, but somehow they fit together perfectly.

"The baskets? Oh, Sanuye and Pikabolt make them. They weave as a hobby, you know. It's pretty cool; Sanuye's been teaching Pikabolt how, and they've gotta build things sturdy in the Red Desert. That's her homeland, by the way. Anyway, with all the desert storms and the occasional flash flood during the rainy seasons and such, whatever they make has gotta be tough to keep standing through that. It's pretty awesome."

"My favorite holiday? Gotta be the summer solstice."

"Granted, it's the only summer holiday, but that doesn't mean it isn't cool. It's celebrating the longest day of the year, the last day before the world starts turning toward the dark of winter. There's a bonfire, and lots of food and dancing involved. Pretty cool, isn't it?"

"Anyway, I gotta get back to work. Stick around a bit, will ya? There's plenty of things to do here. Just don't go sneaking fruit outta the baskets, I already get enough of that with the kids!"

And with that, Xander turns and grabs another basket, before scaling the cherry tree again. You decide to leave him be, though not without snagging one cherry. Just one wouldn't hurt. Greenbean the frog gives you a reproachful look and croaks as you do, though...best head out before you get tattled on by a frog.