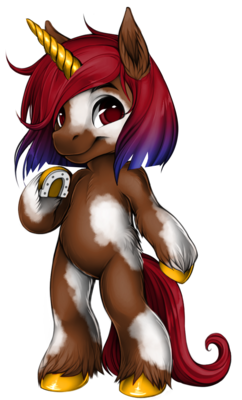 Stepping inside the forge, you see a unicorn hard at work, holding the wooden handle of the hammer stuck to her hoof as though it were magnetized. She was hammering out a very dented shield, clearly in the process of repairing it, while a domestic heraclex in the background delivered more steel to the table. As soon as the unicorn realizes you're there, she stops in her work.

"Oh! I didn't realize you were here. I'm Tasha, and this is my partner, Xena. Who are you?"

"Yep, I work with Aisling in the forge. As you can see, it's plenty big; we've got enough space for the two of us and Kimeya to be working all at the same time."

"Kimeya? Oh, he's a glassblower. You can see some of his work in the cupboards up there, it's amazing."

The cupboard is full of glass ornaments and sculptures in a variety of colors and patterns. Some even are clear on the outside with colored glass within.

"Why are there two blacksmiths? Have you seen how many warriors we've got here? They go through equipment like crazy! Aisling and I have our paws and hooves full making sure everyone is properly equipped. I don't even know how she did it before I moved in..."

"Where am I from? Dragon's Maw Manor, actually. What, did you expect me to be from Olde Foxbury?"

"Nope, I come from the cursed land itself. People kinda have this misconception of unicorns, you know? Like, 'oh, they're pure creatures, how weak and delicate'."

The unicorn herself snorts, showing just how highly she regarded that, before looking you dead in the eyes.

"Unicorns are pure creatures. That means when we are content, our entire being is content. But when we are enraged...we are purely, singularly angry. You do not want to be on the other end of a pissed-off unicorn. Other herbivores, they have antlers, spread off wide to catch and deflect attacks. But us? Our horns aren't for defense. They're for the attack."

"Not what you thought, wasn't it?"

"Yep, anger issues are...definitely a thing. It's pretty hard to reign yourself back in when you're entire being is full of rage. I know Lazarus has a really hard time, whenever he's a unicorn..."

"What? Oh, Lazarus is like, well, he's not a shifty, but he thinks he is. Or not thinks, I mean, he is and he isn't, you know? I don't really know how to explain it. Anyway, he takes morphing potions to change form; he actually got banned from taking regional morphing potions since he's not gonna stick to em and that's expensive. So yeah."

"Yeah, it's...not a pretty sight. It's not uncommon for us to die of a broken heart, you know."

The unicorn shakes her head, as though to clear off her thoughts. "Anyway. Was there something else you wanted to ask me?"

"Hobbies? Well, uh...I mean, I like painting, a lot. I've been teaching Priya how, since she wanted to learn. I don't play water games or anything though; in fact, I don't do water at all. I hate it."

"Ironic, right? The hydrophobic unicorn, living on an island town. But I don't just straight up hate water; I'm fine with it, so long as it's not up to my knees, or worse, even higher." The unicorn shudders at the very thought. "This is a really nice place to live though, and practice my craft. I'm certainly not lacking for things to do here, that's for sure!"

"Anyway, I've got to get back to this. Sir Milo really did a number on this thing. It was nice meeting you though - hopefully when I'm done, you can join our gaming group! We're doing Mario Kart today, it'll be fun. But yeah, seeya!"

With that, Tasha gets back to work, and the sound of metal striking metal once again rings through the forge. Not wanting to just stand there doing nothing while your ears were assaulted, you step outside, enjoying the cool island breeze after being in the rather warm forge.

Maybe you'd pick something outside to go see next...this is a tropical island, after all. Even if it doesn't always seem that way, especially in winter.