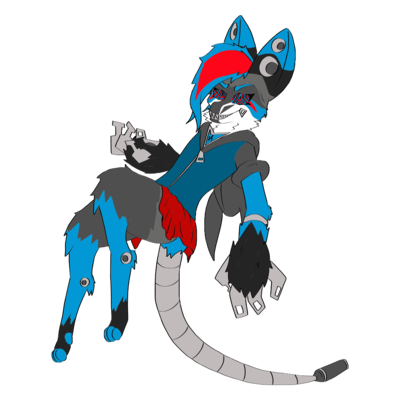 Ira and Shadow, a sort of iconic duo. Ira is basically host to Shadow, who is like a parasite, yet he doesn't sap any life or energy from her in any way.

Shadow is a creature from the Shadow Realm who had came into contact with Ira back when she, was a he. Shadow took on Ira's current appearence, which was fox form at that time, but was, and still is, black and white. He currently resides in Ira's back symbol/insignia, the Invex.

Form #7: Ampwave. This form is just that, an ampwave, nothing really special about it. Her other 7 forms are: Wickerbeast, Protogen, Iratek, Amalgamation, Dragon (which dragon has three forms of its own: draggo, dragon, and draggonizer. That's in order of smallest to biggest), Fox and Manokit. Guess what part is taken from what.