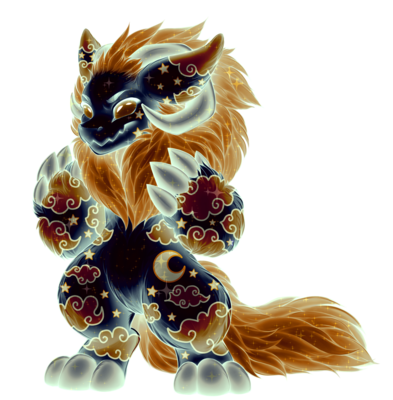 Name: Notcurne
Age: 200
Career: None
Favorite Color(s): Indigo
Likes: being with friends, making things with her own two paws, seeing magic tricks, board games, weaving, and sunsets
Dislikes: abuse of any kind, being trapped, sunrises, egotistical people, stepping on glass (or worse, legos), and stubbing toes
Favorite Food: Handcrafted Cheese Cake
Hated Food: Rock Candy Skull (she doesn’t have the patience for hard candies)
Other: Stars can eat whatever foods they like, which in her case is redundant as her species is an omnivore, Toyhouse

Catching sight of the little weir lights that mean Azalar is present, you see him hugging another wickerbeast before waving goodbye and going inside his house. The other wickerbeast looks skyward for a moment, a solar flare nudeer prancing around at her feet, before catching a glimpse of you out of the corner of her eye and turning to face you.

"A traveler? That's nice. I bet you've seen some really cool places. I'm Nocturne, and my friend here is Lunaria."

Nocturne points skyward, where the stars are just beginning to show themselves.

"Yeah. There's lots of stars up there in the heavens, and more besides. Where did you think galaxy villagers descended from? The ones who aren't wearing costumes, anyway."

"How am I down here then? Silly, stars aren't always up in the sky! What do you think we do during the daytime?"

"Yeah, we can sleep. At night we curl up outside, out in the Great Dark Beyond - what you know as space - and when we sleep we glow, lighting up the night sky. It's our duty, you see. Long ago, the First Star swore to the moon that he would help her light up the night sky, and we've been doing it ever since."

"Azzy? Yeah, he's one of my best friends. Funny story, there. When I was just a little star I really wanted to come see what the Earth was like, you know? I wasn't old enough to be able to go down and back up at will though, so I decided to tie together a rope to get down, and then climb back up when I was done."

Nocturne just looks rather sheepish at the admission.

"Yeah, no, that didn't entirely work. I mean, I got down just fine, but by the next day the rope had blown away, and I was trapped down on earth; a fallen star that left a dark spot in the skies where there should be light. And let me tell you, being down here it was scary. All I wanted to do was go home. I knew the Serpent carried Quetzal Palace into the heavens every now and then, but the Serpent descends to the earth only once a year, and that had been two weeks prior. So I had no way of returning to the skies, not right then."

"I wandered around for a while, trying desperately to find anything I could use to get back, and ran into Azzy. He helped me search, and we became fast friends. It wasn't so bad being stuck on Earth anymore, now that I had a friend. We spent a good five years together - the time flew by so fast and so slow in those swamps, without a way to keep track of the passing days it’s near impossible to tell once you’re in there long enough. I had no idea that it had been five years until star guardian finally found me there. Earth is a big place to search, you see; some places worse than others."

"How old am I now? Two hundred. It takes that long for stars to reach adulthood, you see."

"How long ago did I meet Azzy? Well, that was fifty years ago, when I was the equivalent of an eight year old mortal."

You can't help but gape at Nocturne. Azalar had been in the swamps for fifty years?!

"What? Oh, well, we actually don't know for sure. He was in the swamps when we met, but we have no idea how long he'd been in there beforehand. So he could be older than me and we'd never know."

You decide to finish processing this later, and change the subject.

"My hobbies? I like weaving; Sanuye and Pikabolt have been teaching me how. I can weave a much better rope out of cloudstuff now!"

Nocturne laughs, clearly entertained by this.

Nocturne starts to glow dimly, the light soft and soothing. She winces.

"Sorry, I've got to go. I have a home to return to and a duty to do. Even if it's just sleeping. I'll see you around tomorrow, if you're still here. Sweet dreams, traveler."

And with that, Nocturne looks up toward the sky again, before turning into a pale, blueish-white light and rocketing up into the heavens. When the streak of light fades, you can see a star exactly where she flew up to.