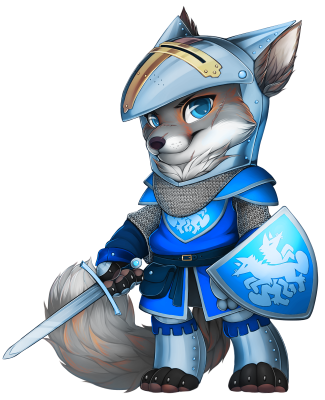 Falki is infected with Lycanthropy. Changes into a beastly monster after exposure to moonlight or especially frustrating board games. Howling at the moon relieves the symptoms for a little while, but use a Golden Apple for best results.


History
Inspired by the warriors of Olde Foxbury, there was never any denying exactly the kind of man Falki wanted to grow up to be. Admittedly, he was a fair bit on the fragile side in comparison to others when he was a child. His childhood was riddled with sickness after sickness, often forcing him to stay out of school and certainly out of the potential for training. However, the images of the brave knights fighting for his home's honor gave him strength when he had none.

When he was a young adult, Falki still found himself to be relatively scrawny, but it did not deter him from becoming a squire. It was an arduous journey, especially considering the fact that his mentoring knight was none other than Torgrim the Merciless, an older knight known never to take pity upon his foes and often inclined to fits of violence.

Despite his ruthless and seemingly uncaring nature, Torgrim took a great deal of time with Falki, clearly able to see the young squire's loyalty was unfaltering. And above all else, the puny fox could definitely take a hit. The tiger grew to respect this weak little fox, and trained him vigorously until he was no longer weak nor little. While he was certainly now far from incapable in combat, Torgrim admitted that the fox would never have the level of agility and precision that other warriors did. Instead, the tiger always encouraged Falki to use his mind and superior durability whenever it was possible, claiming that these were his greatest weapons and defenses all at the same time.

Those lessons are ones that Falki has taken with him during his own knighthood, and certainly as he has trained his own squire. While he isn't the best knight in terms of raw strength, he makes up for it with heart, reliability and the determination to always get back up again. There is never a task too overwhelming for him, and not a single challenge Falki will back down from. Truly, in his own mind, there is nothing he cannot accomplish.