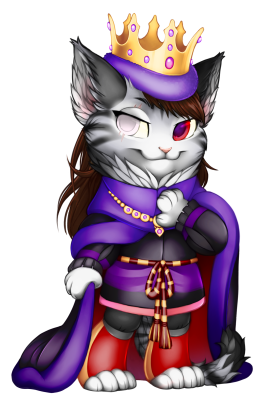 Cinna is infected with Vampirism. Symptoms include craving blood, sensitivity to sunlight, an allergy to garlic, and changing into a bat after especially forceful sneezes. If they start to sparkle, immediately consume a Golden Apple to cure the infection.

Cinnabar Shecklet, a silver tabby cat queen from a faraway land by the far north. She does not actually live among the Aster Guild member, nor does she belong to Quetzal Palace. Still, she dwells in the latter as to satisfy her beauty taste of the land, as her perception of what was the most gorgeous in Furvilla would be on the back of the the Serpant itself.

She is an expert on sharp, meelee weapons and the art of claws attacking moves. Her signature attack is called "Claws of thousand knives", using her razor-sharp claws swiftly swipes at the opponent. Some were made completely blind by this ferocious and ruthless queen.

Her right eye was blind from a battle against a dog, in which she still won. Still, as he managed to make a mark on her, she was furious and want that one dog dead. However, she's quite interested in his boyfriend's unique mutated genes. She would take away the dog's love of his life one of these days...