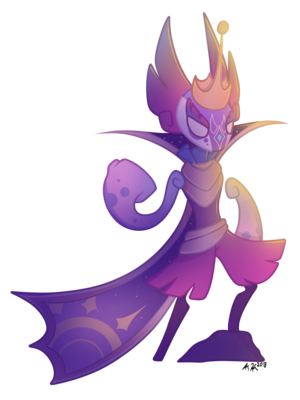 There’s a flitter of movement in the corner, then a beak-like mask pokes around a stack of books at you. Their feathery eyebrows lower to obscure their white eyes into a fine line, and a clipped voice chirps up from them. “Yes, what is it? Step in, mind you don’t knock anything over or track in dust or leaves, then speak your piece. I’ll be listening.”

With that, there’s a flash of their starry cape, and they’ve retreated back within the shadows of their domed home, dancing around their piled books and pillars of discarded paper.

Aogan, like most of their magically inclined kin, is not one given to light chatter. They have a bit of an attitude—determined to one day be among the elites in the Knights of the Archangel, they are in a bit of a rush to be considered worthy of them. This being said, they devote the majority of their time to studying and training, alone. They see no reason to work with others—they are meant to protect them, to earn their respect; not their friendship. Only one thing demands respect in Aogan’s mind, and that’s power. If strong and wise enough, then respect will follow, and so order will fall into place. And they have no doubt of where they belong.

They spend most of their time experimenting with their magical abilities, then doing their best to write them down as fast as possible. As much as they’d never admit it, they are regretfully forgetful. This can be solved if they decide to focus on one thing at a time, but being single-minded is a trait they deem something suited only for brutes, and so they resort to multitasking the best way they can. Writing everything down, and organizing it on their walls, so that it can be torn down after the task’s completion. But as they don’t want to waste the paper, it gets discarded to the floor, to be reused later on, either for new task-setting or to experiment with runes. The only exception to this is the sprawling papers pasted to their ceiling, circling around, generally out of reach for a typical alderscar. On these papers is a star chart; reflective of the night sky, it paints that season’s constellations. These papers are specially imbued with their own magic, so that with a mere wave of their arm they can shift the stars on the papers to their appropriate positions at any season; but to do this, they need to plot it out first.

Rune-making, along stargazing and charting the celestial bodies’ course through the sky, are Aogan’s two main hobbies. They have a childlike fascination with the night sky, and for this reason they’ve made their home as far up in their alder tree as they could get. It’s still a bit of hop and a climb to break free from the foliage, but they don’t mind; it’s short enough, so they can spend nearly the entire night among the treetops, drawing out the constellations and crafting their own night sky one paper at a time, which they use to update the chart in their home. They hope that in rising through the ranks, they can learn more of the stars and planets above them, and fulfill their desire to be known as ‘Celestial Caretaker, Aogan’.

Rune-making, then, is what they do in an attempt to help them remember what their soul element is capable of. Thus, the ‘runes’ are a word, or a string of words, written together to define what magical essence is bound into the parchment. A parchment reading, ‘Telekinesis’ or ‘Mind moves matter’, when activated with an alderscar’s elemental energy, will impart to them a limited amount of telekinetic power, regardless of the alderscar’s original element. In this way, Aogan is able to, with just a flick of their hand, gain powers they may have forgotten they can utilize. They did find that other alderscars can use these runes, but after ascertaining that, they refuse to let any others touch them, and won’t even consider giving them away, even for a price. Like their star-maps, they are Aogan’s treasures, and only given to those they respect or very deeply trust.

The books are mostly there for a little bit of extra reading, or for supplying new, fresh pieces of parchment. They rarely write in a book, as they find it too strenuous and inconvenient to flip through a book for a specific set of notes, when they could just walk over to the wall and find it there… somewhere. Beneath this constellation, perhaps? Or that one—yes, that makes sense. It just makes more sense, then looking through a book.
--
Masculine ; They/them, He/him