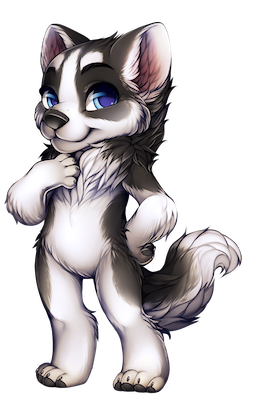 Man, can things get ANY more interesting when you explore the outskirts of town? Holy geez! There are SO many things to discover when you dig for them! Seeds, equipment, shells, heck, there's even some cool raw materials you could find! Being an explorer is Flynn's key to enjoyment and he has no regrets picking the job. I mean, who WOULDN'T enjoy this job?! You discover something new every day!

Flynn wishes his significant other could understand the adrenaline he feels when he finds something. But Elsie's all like, "Alchemy is so much better and oh, I don't like getting my hands dirty..." Excuses, excuses! Sometimes, Flynn wonders how he even tolerates her in the first place. All she does is complain! Ah well. At least she's pretty AND gives him the best cuddles in history. Heck ya! Love conquers all!

This husky also may be the most curious and daredevilish ever! He's not afraid of ANYTHING (well, except losing Elsie. But that won't happen any time soon)! He even runs his own blog on the daily discoveries he finds. Flynn is so obsessed with exploring, that even in his dreams, he's exploring! There's no time to rest when there's exploring to do!

He's very outgoing and perhaps a LITTLE too loud and rough at times. A husky can't help it when there's that surge of adrenaline running through his veins! It's in his nature! His voice is a medium-gruff tone and he wishes it were deeper so he'd sound more powerful (whatever the heck that means lol).

When he explores, he loves to wear ragged/tattered clothing (maybe to keep the dust off his fur? How does that even make sense anyway. The clothing he wears is COVERED in dust since he finds them during exploration. Not to mention that they're not even his to begin with... Ok, let'sssss not think about that). He even has a pearly fedora that he always wears (yeeeeep, he found that one too. Geez, Flynn, what are you? A scavenger? On second thought... Yes. Yes he is). He believes that if he wears these to all of his adventures, it'll bring him good luck and he'll find something INCREDIBLY valuable (and become famous from it! Cha-ching! Oh yes, fame is a HUGE dream of his. Keep trying, Flynn. You'll make it one day).

Flynn's Brown Jelly is named Pudding and Flynn always seems to accidentally neglect her at times when he's out exploring... Luckily, Elsie takes care of her when he's gone (which is often).

(Some Flynn quotes)
"I FOUND SOMETHING!!"
"Finding something new beats chewing on a good 'ol bone any day."
"Check out my blog, man!"
"Exploring is hard work... But worth it!"
"Why don't you all come with me to explore?"