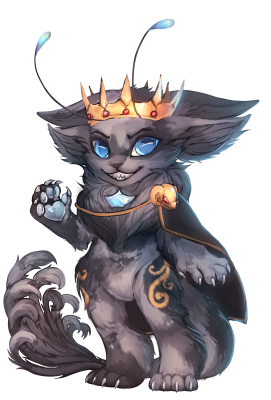 All comments by King Etienne are in-character.

Darling sister, if only you could have lived to see me come this far.
Even a ghost cannot touch me through stone walls.
Darling, with our kingdoms united, we will be invincible.

When he was born, Etienne was third in line for the throne, sharing this rank with his sister, behind the Duke and his firstborn son, a blond boy named Aurelien only a few months his senior. He and his sister, although they would likely never truly be royal, were well-beloved in court. It was through tragedy that the pair were even considered for the position. A terrible fire ravaged the Duke's home, engulfing father and mother, and rendering the eldest child unfit for rule. This truly terrible incident lead to the upheaval of the kingdom, and Gwenwyn and Etienne stepped forward to bring the fearful beast back to heel, with only their humble educations and pragmatic demeanor to help them.

Tragedy struck again shortly after, devastating the family once more. Gwenwyn was ravaged by a beast, and left a shell of her former self. Although she survived the encounter, it was just barely, and with the help of a neighboring queen who loved her well, Gwenwyn was given new life... although now, much like the former prince, she was hardly fit to rule.

It was Etienne who brought the kingdom together in a time of grief. By his power, the beast which killed his sister was captured and enslaved for the sake of the kingdom, and the people rejoiced to at least have a place to push their blame. Etienne, the sole remaining heir, was crowned King after bringing the people a brief moment of hope.

Although well loved by his people, King Etienne is never safe, as there are still those who would desire his life as well. There are rumors circulating that a skull-faced monster is in pursuit of the young king's life, and will stop at nothing to kill him. The King keeps his guards close to him for this reason, and never strays far from his castle, paranoid. Even darker rumors suggest that there is no such beast chasing after the king, and it is a delusion of his mind- a manifestation of his fears after seeing so many around him die.

Paintie by buffalo
Comment CSS by Tashamon
Everything else by Me
King Etienne plushie commissioned by me!
Praise your snarky overlord.