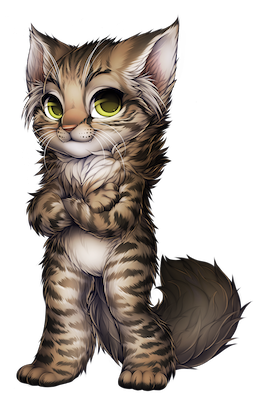 Story: She is a fisherwoman, that sacredly goes on her boat to the ocean, but never fishes a single fish. The other villagers don't know what's going on with her. But she knows. She knows why she comes back every night with fewer tools than she took to the ocean. With fewer... Sacks. But she will never tell anyone about it. After all, "anyone has something to hide".

Now, I'm gonna tell you the real history behind this Villager's name and species. As you might have read here, I'm not thaat animal/furry person. But, in a random day of my life, I found an baby and small street cat, which was very loving and loved by everyone in that street. I've feel in love with her in a way I can't even describe, because o_O I don't like animals. But she got my heart. A week later, I've took her to my home - with parent's approval. That, my friends, was on March 10, 2016. She knew how to survive between my older dogs - cane corso and labrador. The one who was facing her was the yorkshire of my lil sis. But, bc of the size I think, it haven't been a real problem. But the problem was a freaking big garden I have inside the house. She was using that as bathroom - and ignoring her brand new sandbox, with cat sand. And that became a problem because now the house was stinking of cat poop. I've tried to teach her to use the sandbox, but was in vain. Well, like two months after I got her, I had to find her a new home. And I found. Wasn'ta simple task. I've never liked a cat the much I liked (and still do) Charlotte. She IS, and will ever be, my first and only cat. The only one I've ever cared about. Now, she is gone. But I will never accept that. She is STILL with me, in mind and memories.

Now, this is the picture I took when she first came for my house.