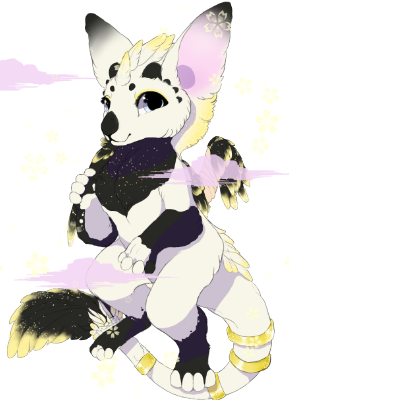 Hello! Thanks for visiting my soft hearted Floof!

This is Glass, a very gentle and timid young doctor. I have yet to make her paintie too, and this one is indeed not an extraterrestrial! Oh my gosh! I'm glad I got the tiny wings, they suit this little faint-hearted Angel Dragon so well! Glass is a very calm and timid Angel Dragon, who prefers living within her own working space. For example, if she has a build doctor's hut, she'll have a space to live in it too! She's a very dedicated health offical, who will be on the scene the moment it happens.

Glass was born a runt, smaller than the rest of the litter, mangled, unusable wings, and with albinism. She didn't move much or seem to respond, while her siblings were already on their feet and learning to hunt. She was soon abandoned by her mother, thinking the runt wouldn't live a month.

Thankfully she managed to survive on her own, hidden in a dense thicket of overgrowth, and soon teaching herself how to walk, and move. She has always been disabled with her wings, and to this day has a lot of trouble walking. Due to albinism, Glass' eyesight is so bad she's nearly blind.

After growing enough on her own, Glass came across a village, where she then learned how to speak, the native language of the village being English. Glass had been raised in said village, and while they put her up for being a warrior, Glass' inabilities kept her from such. Plus, fighting just wasn't her style.

Soon after growing enough, and learning how to become a Doctor, Glass set off once again to live on her own. Her story now splits in two roads, one being for her own world, and one for here, on Furvilla!

Soon she came across Sukii, who had hurt her leg on land, searching for materials and new plants to grow. Glass questioned where Sukii lived, so she could treat her wounds at her home. Sukii had mentioned Oceandome, pointing to the large, vast sea. She gave Glass a diving mask and oxygen pouch, as she led the doctor to her village. That's about it! I'm always open for Rp's with Glass, though I prefer them being in fourms ;w;