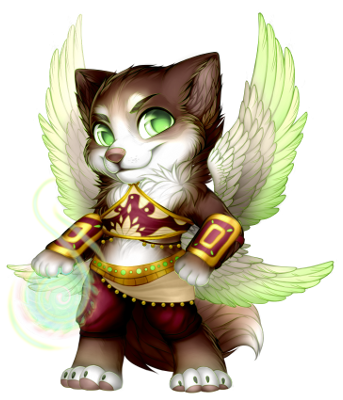 Jaquerel is a cheerful, bubbly character who will take control of any situation in a heartbeat if she feels she needs to. While outgoing and willingly friendly, she can be very bossy, and when she's stressed out or nervous she gets snappy (something she apologizes for profusely after she feels better). She really only has good intentions at heart, and everyone knows it, so there's no hard feelings.

Jaquerel is now an angel, though this wasn't always the case. And while she's very grateful to be a Virtue--an angel who specializes in healing--she sometimes worries that she's forgetting who she was before becoming a Virtue. Everyone in town is relatively new to her, though at some point in the past she feels that she know Rhonden, Mia, and Chimer at some point, and while the former two swear they've never seen her before, Chimer has never given an answer, which makes her more than a little nervous. She's pretty well known by everyone here, helping to tie the village together and form healthy bonds between everyone. Chimer is really the only exception, as he seems very awkward around her, which gets Mia annoyed, and then both her and Rhonden have to diffuse the situation... She really wants to know what's happened between Chimer and Mia in the past, feeling that it's the key to getting everyone in the village in good spirits at last. She's had no luck so far though...

Jaq (as she's commonly referred to as) refuses to fight on any grounds, only using her magic to peacefully subdue her attacker. Though, as a healer, she really tries to avoid that stuff.

Jaq is ready and willing to learn how to doctor now! Kind of. She's still low on plants but she has the determination anyways.

Paintie by Oreloki
You can commission here!
((This is all from an original universe that I've created, known as Prian. If you have any questions about it, feel free to ask! Also, I'm usually pretty open to rp, and all this about Prian is simply used as reference to show that there is something I'm pulling from. You don't have to know anything about it if you want to rp with me, I'll accommodate for anything ^v^ it's all for fun!))