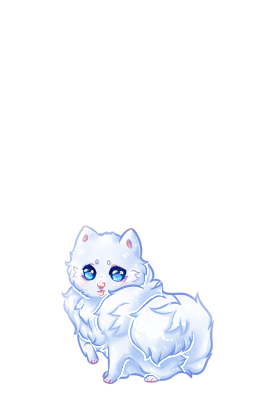 Greetings travelers! What must you be thinking? What an odd looking creature you might say and you would be right. You see, it all started one sunny day...

A young woman decided that she needed a species that was cute, fluffy, and small. Having no idea what she wanted, she took to asking the Mad Scientist Jaquel to create a species with all of the qualities she sought. Jaquel searched high and low but still didn't know exactly what species he should make. After looking at many fluffy creatures, the young woman decided she wanted something similar to a fabled creature called the Teacup Pomeranian. With the species in mind, Jaquel set out to do what mad scientists do. And thus was the creation of my species.

The first of my species, the Tea Pom. One day, there will be a bountiful number to Tea Poms in the world. Perhaps, it is just hopeful wishing, perhaps not. We shall see.