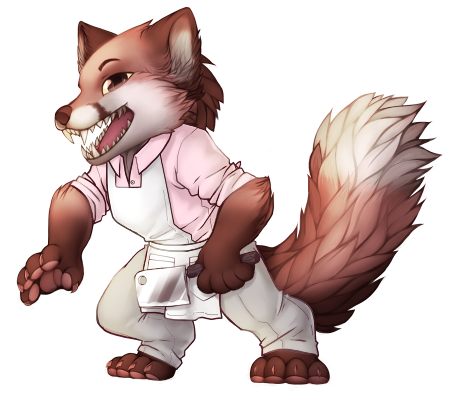 For someone whose career is chopping meat all day, Waren is particularly upbeat. He takes great pride in his work and does his best to provide the finest cuts of meat for the citizens of Olde Foxbury and surrounding areas. On occasion, Waren would travel to other villages and sell his product. Though, that's a practice that has mostly stopped at this point.

After falling in love with a certain blacksmith, he found himself a bit distracted. However, with the really good, there often has to be a dose of not-so-good to balance it all out. Shortly after meeting Bjorn, Waren was bitten by a werewolf while doing some late night hunting. The beast stopped himself from killing Waren, but it left the butcher with his own lycanthropy to deal with.

Were it not for some well-timed help from Bjorn, Waren most likely would have had a more difficult time with his new form. However, the beast of a fox bounced back, earned the trust of the village and went back to work as normal. There were plenty of villagers who doubted Waren or were wary of them, but it only took time to prove himself, along with a few well-placed interjections by Bjorn.

It didn't take too much more time before the butcher and the blacksmith were married, happily living together and looking forward to their ever-promising future.