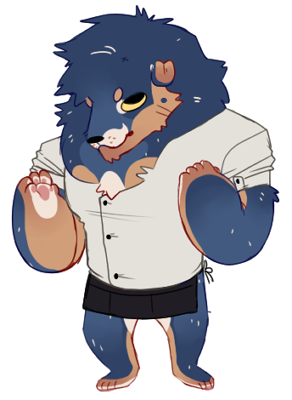 All comments by Bartholemew are in-character.

Thanks for the opportunity, ma'am. I've got it all under control.
I'd love to uhh... make you some mac'n'cheese sometime.

Barth might not be the most intelligent lion around, but what he lacks in smarts, he makes up for in shoulder width, bicep diameter, and the heart of a much larger cat. Deep down, the big lug has a fondness for wildflowers and cooking, and enjoys a simple life. Macaroni and Cheese is his favorite meal to both eat and cook.

Bartholemew's parents had big dreams for their little lion cub, They hoped that their son would one day take up a position as a castle guard, or become a decorated soldier. After all, he was built like a battering ram and always a little slow on the uptake. However, Barth had dreams of becoming a chef like his father, and dreamed of working in the royal kitchens to cook for the king and queen, despite his lack of finesse and poor memory for recipes.

Barth's parents tried desperately to hone his interests in the opposite direction. They gave him punching bags and soldier toys, wooden swords and shields, but the only tool Barth wanted to have in his meaty little paws was a spatula, and subtly nuanced discouragement wasn't nearly enough to prove to him that becoming a chef wasn't exactly what his parents wanted for him.

Bartholemew approached the owner of The Jealous Harpy, a local tavern, begging to be given a chance to prove his amazing kitchen skills and be put to work. The tavern owner, Ninette, gave him a chance... and Barth "proved" himself by preparing the most vile tasting bowl of mac'n'cheese she had ever had the misfortune to sample in her life. In the end, Barth's strength and insistence won him a job at The Jealous Harpy anyway... with the big-sounding but small-at-heart title of "Dining Supervisor," putting Barth right in the middle of the tavern's main dining room to "supervise eating and going ons."

Although he primarily works as a bouncer for The Jealous Harpy, escorting rowdy patrons out and checking coats at the door, Ninette lets Barth wear the chef uniform and arrange food onto plates, and he is proud of his job as Dining Supervisor, taking the title very seriously. He has even grown close to some of the locals, and Ninette's younger sister Giselle, who is just as scatterbrained as he is, although less gifted in the musculature department.