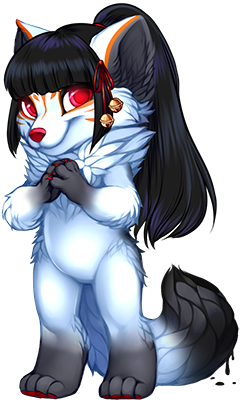 Veila
The Inkbrush Fox
(a.k.a Velvet)

Veila's tail can be used to paint ink like a brush. The same goes for her paws and claws. Ink hardly ever stains her fur, but she knows about as many good cleaning tricks as a mother would.

She is a kitsune who has lived for almost two centuries now, and dedicated most of her time to writing. Veila is a skilled scribe and can write calligraphy in different languages, including Chinese, Japanese, English, Russian, and Greek. She is also quite good with making logos, but she just can't get Pepsi Cola right yet.

But like any other fox spirit, she is cunning and a trickster at heart, so she loves a good joke. Veila especially thinks it's funny when she makes others' pens explode, or their ink bottles to spill. She's felt a little separated from a lot of her kind though, since she doesn't quite understand why some of them search for souls to be human. In all her life, she has collected but one soul, and intends to keep it that way.

When not around people she knows well, she covers her face with a mask. This mask is never to be removed by anyone else but her.