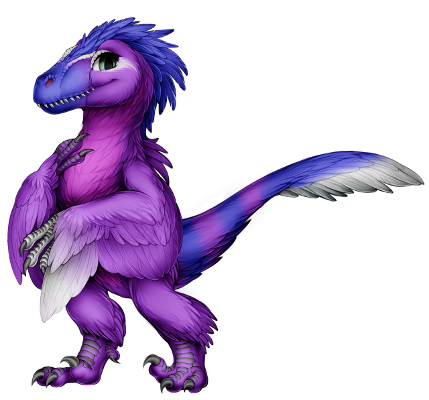 Calm and collected though shy and timid.

This young male is best described like Marmite, you either love him or hate him. He has a fun and crazy side to him that can bring out the immature child-like soul some, but confusion in others. This smaller than normal Velociraptor tries to be as open minded as possible, viewing a situation from all angles and always speaking an a soft and gentle tone. He can surely stand out in a crowd, even if that might not be his cup of tea.

And speaking of tea, Raji is a hopeless addict of the milky, herbal substance. One could blame his British heritage for that.

Though, despite his relaxed nature and the fact that he seemingly never gets frustrated, Raji is not the happy-go-lucky chap he so desperately wants to be. At times, he can be deathly shy, which does him no favours as he is the leader of the pack. He also suffers from depression though, while he can, he takes time to learn about his mental illness, what it does to him, and attempt to help others also going through the same struggles.

His athletic and social skills (or lack there of) are not what earned him the role as pack leader, but it was his ability to understand the thought process , emotional states and cause of actions of those around him.

On March 15th 2018, Raji stepped down from his role as pack leader in an attempt to better his mental health.