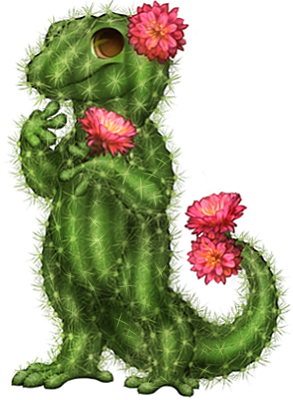 “Plants got a lot to say, if you take the time to listen.”
-Eeyore

Coriander is a cactus. And that one fact has very much shaped who he is today.

Coriander has a green thumb like no other. He imbues the world with life through his loving, gentle touch. It’s almost as if flowers spring up where he walks (they probably do, but only because he carries wildflower seeds at all times). Coriander shares a connection with nature that is almost spiritual. He turns to his plants to find peace and is most often found in the garden.

Coriander is painfully shy, and he suffers from social anxiety. He doubts himself constantly. In part, this comes from his desire to protect everyone, which is hard when your whole body is covered in needles. Coriander has the biggest heart, but he tends to isolate himself for fear that he will hurt the people he loves. He wants nothing more than a warm hug, but he will never let you. Not when it would be his fault that you get hurt.

About Parsley:
One sunny morning, Coriander noticed an energetic hummingbird zooming around his garden. Not noticing that Coriander was significantly less inanimate than the rest of the plants around him, the little bird whooshed to his side and began tickling the flower at his ear. Coriander made sure to check for the little bird every morning from then on until the pair were nearly inseparable.