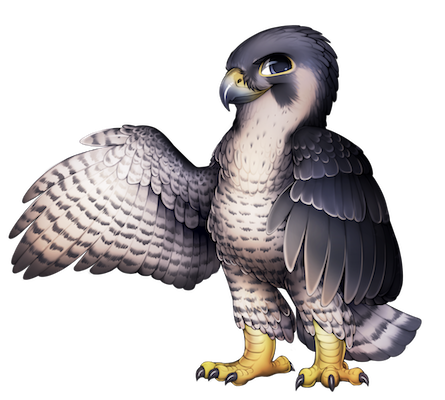 He looks at you with his focused, beady eyes, before letting out a muffled screech.

Status: Alive
Family: N/A
Romance: Has not yet searched for a mate.

Hayabusa was just your ordinary peregrine falcon, leading a simple life day in and day out. He was hunting for prey and seeking shelter at night, as one would expect of a raptor. Until one day he found himself caught in a hunter's trap. It was full of wires that kept cutting into his body, especially his wings, leaving him to wonder how he'd manage to survive even if he somehow escaped. But he couldn't screech for help, as it may have alerted those who trapped him in the first place.

Biding his time trying to think of how to rid himself of his prison, he was suddenly overshadowed by something – or someone – huge. Hayabusa couldn't make out what exactly it was initially, but after getting his bearings he saw a creature that he had only heard from in legends up to that day. He was unsure what fate would await him as this giant dragon began to shuffle around his cage with its mighty paws. As he wondered whether this would be the end, he suddenly felt the tension from the wires snap, and slumped to the ground from the sudden lack of resistance against his body. As expected, he wouldn't be able to walk, much less fly, anywhere safe any time soon...

Unexpectedly, the dragon picked him up and cradled him with one arm. It did not speak for the longest time. Only when it had arrived at some sort of hut, it began talking, albeit not to him. The inside of the hut looked like a kitchen, and Hayabusa wondered if he was going to be someone's dinner now, but to his surprise, his body was being examined and treated. Later he would learn that the name of his saviour was Kijame, who had brought him to Shirovita's hut to patch him right back up.

Exploration
The time came for Hayabusa to set out into the wild again, or so Kijame thought. His body had recovered and practice flights went without a hitch. But each time he set out, he would return to her side, often perching on one of her shoulders. Eventually she understood: Hayabusa wished to remain by her side. And his skills were much appreciated, for there was no faster messenger around in all of Ryû. Additionally, he would often serve for reconnaissance, surveying new areas for dangers and resources.

Animal Husbandry
It wasn't just exploring and scavenging that he was skilled in however. Over time, Hayabusa managed to amass a following plenty animals big and small that were hurt or trapped in some shape of form, and he led them all to Ryû as a safe haven of recovery. Some of them stayed there, some of them left, but they all found a way of expressing their gratitude to him and the village with simple gifts or deeds.

Need an Animal tamer or breeder? Hayabusa's here to help!

His mistress and beloved caretaker.

Quite similar to his mistress, but rarely calling for him.

A partner in crime, so to speak.

Weirdo. But, he serves the same mistress, so he is tolerated.

One of the few who understand him without words.

Occasionally tries to steal his feathers. Hayabusa is not a fan.

Sometimes races him in the skies.

Would be another partner in crime, so to speak, if she were alive.

Sometimes worried that she'll pounce and eat him.