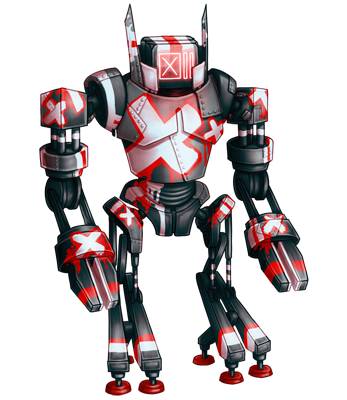 All comments made by G4M3 are in-character.

G4M3 0V3R, designation G4-HAL-78222, is a generation 4 HALBERD unit. It works in Deltar as recon and, as needed, hitman for the underground cybernetic rights faction, BL4CKST4R.

It's vice-like hands can crush with thousands of pounds of force, which made it ideal for search-and-rescue operations, as well as construction. The G4 HALBERD units were discontinued after repeated failure to remove fatal bugs in their coding. They were replaced by the shinier G5s, which were designed as an EXO-Suit augmentation or remote-controlled unit, rather than an autonomous machine. The rebellion sparked Aterian companies to remove any free-thinking from their machines, opting to revert back to programmed or human-controlled assistants.