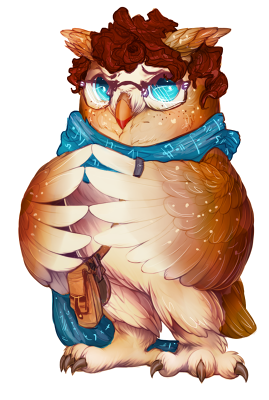 Quartermaster is infected with Lycanthropy. Changes into a beastly monster after exposure to moonlight or especially frustrating board games. Howling at the moon relieves the symptoms for a little while, but use a Golden Apple for best results. Q (it's a smaller mouthful than Quartermaster) is tiny and usually pretty laid back. Fond of puns and technological or magical advancements, his personal classification would be called a technomage and he spends most of his time either exploring the local transit systems or tinkering with the things he found while exploring (picked up off the ground in other words.)

He gets easily distracted and likely has too many projects going at the same time.

He actually is mostly flightless, gliding in general directions, but he still gets places quickly and parkors himself around like a boss.

Sleeps during the day, would probably beat your gym at Pokemon Go! He dresses like a fashionable grandpa or a really gay one depending on the day and is generally an intolerable hipster about this. If you ask him his name you will get any manner of Q-beginning aliases because he's a jerk like that.