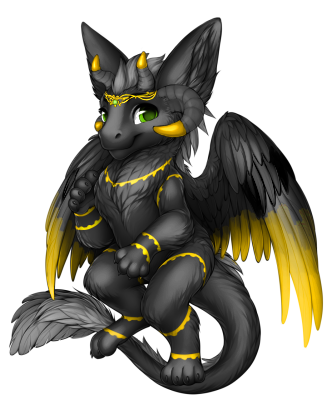 One of the first brood born from Nidhogg, Nolanel is upwards of 4,500 years old. Of those 4,500, he spent 800 of those years fighting a 1000-year war against Ishgard, which was Nidhogg's sworn enemy after the betrayal of his sister, Ratatoskr. Blind to his father's rage, Nolanel sought to undermine Ishgard's attempts to defend against his father's relentless attacks. But, when his first lover, who was an Ishgardian, was killed because Nidhogg found out of his forbidden love, Nolanel had to stop and figure out what he was really fighting for.

And so, for the last 200 years of the war, he went into hiding and worked on the sidelines to assist Ishgard in their fight against his own kin. With the help of some of his friends, he fed the armies valuable information regarding Nidhogg's planned attacks.

After the Warrior of Light defeated Nidhogg in the Aery along with the help of the Azure Dragoon, Nolanel offered his help to the warrior in hopes that such a war would never happen again. However, when the Azure Dragoon, Estinien, fell victim to Nidhogg's influence, Nolanel realized this battle was not yet over.

He assisted in the final, final battle against Nidhogg, but was greatly wounded, putting him in a coma and confining him to a bed for an unknown amount of time. When Ishgard was finally at peace, he managed to awaken. Guilt-ridden for feeling unable to help Estinien sooner, Nolanel retreated to the Churning Mists for a short amount of time to ponder. If one ventures to the Churning Mists, they may find a black dragon with gold accents perching or flying among the many other dragons that inhabit the area.