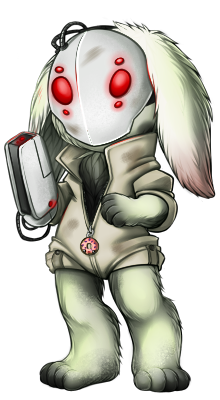 Bubonic no longer has a house! They will be unable to work. Please replace the house or move Bubonic into a FC slot.

Bubo was born in a lab. He never had a real name, or a family, or even friends. His only purpose was what he was designed for - to serve the Institute. A cyborg designed to carry biological contaminates (namely a modified plague) and infect large areas, he's deadly and disgusting. He no longer has eyes and relies on the complex relay of his mask to see the world around him.

He was fine with all of this, until one day something changed. He doesn't know what it was, but he found himself fleeing for his life from the Institute. The world is a big, scary place for him - but he found refuge with a mechanic who lets him sleep on his couch and eat as many doritos as he wants.

A little confused and naive, Bubo is pretty friendly. He's just not allowed to meet new people, because he tends to terrify them.