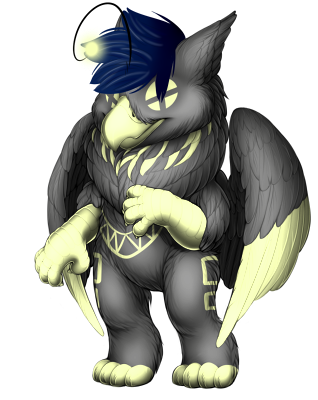 Flash is blind. Yes, he knows you noticed his lack of eyes. Yes, it's okay to ask about it. As it turns out, Flash loves to talk about his "deformity". Flash was born without the need for eyes, living deep in the maze of caverns inside of a large mountain named Choho mountain.

Flash, much like the infamous angler fish, uses his lure to attract prey. Mostly that consists of moths, bugs, and in the past, occasional bats. Flash left the caves when he turned 16, choosing to go out and experience the world in any way he could.

Shortly after his leave, Flash met a flying fox named Oktober, who had feet unsuitable for walking. He plucked the little guy up and sat him on his shoulders, and that is where he can usually be found these days. Oktober acts as the eyes, and Flash is the legs. They often joke about getting a large coat and pretending to be one tall person.

Flash has a healthy thirst for adventure, and is very upbeat, a nice contrast to his boyfriends snarky and cynical attitude. He likes to make new friends, and will often ignore his top half's requests to "shut up and keep walking" while talking to new people.

Careers: Construction/Explorer
Friends: Clockworks, David, Risk
Quote: "I don't need eyes to see if someone is good at heart."