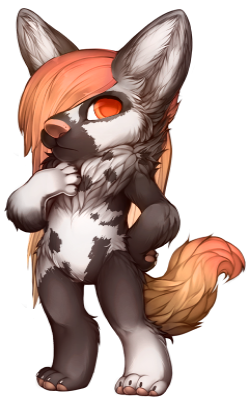 A cunning, sly, silver fox-timber wolf hybrid. She is good at bargaining, and nearly always gets what she wants, one way or another. She is not really a friendly canine, and tends to keep to herself. One of her favorite things to do, is search for items, in dangerous, adrenaline spiking places. Places most creatures wouldn't dare to go. She also faces creatures most warriors wouldn't dare dream of facing. She has a scar on her right eye, which she hides with her hair. She got in a nasty fight with a monster, and it gouged her eye. Needless to say, she also blind in that eye, but it doesn't hold her back ar all.

As a kit, her life wasn't pleasant. She was seen as an outcast among her father's wolf pack, and shunned amongst her mother's fox community. She eventually gave up on fitting in, and became a loner. Deep down, she still longs for friends, but doesn't know how to approach people. She left her family, to see the world, and all it holds.

She eventually moved into Momo's ragtag, nomadic group, and though won't admit it aloud, she actually kind of likes being a part of it. Nobody makes fun of her, and they try to become closer, she just doesn't know how to allow it...

Nadine has never been in a relationship, and wants to keep it that way. The dark, spotted vixen can be steely and cold, but maybe deep down, she is nice. You can try to make friends, if you dare. She won't bite, hard.