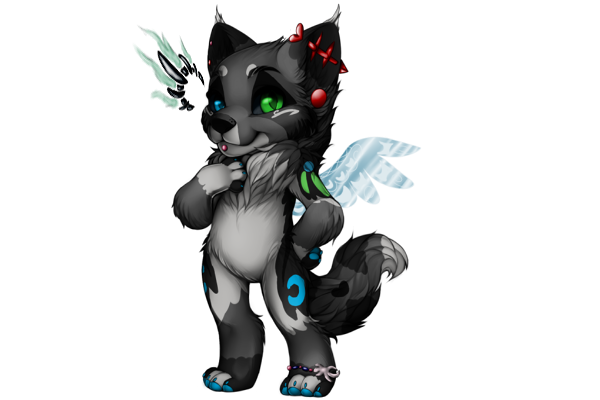 Hel LokiSon
Age: 18
Born: March 30-Aries
Sexual Orientation: Pansexual
Fursona: Yes [x] No [ ]
Species: Tundra Wolf/Hell Hound
Rank: Omega (acts like a beta at the least/was raised to self sufficiont)
Element: Green Fire
Language: English, German, American Sign Language
Skills: Art, dancing, singing, and cooking
Personality Type: INFJ
Personality: Kind, loving, loyal, pationt, good listoner, easily blinded by anger, chill, shy, bubbly, open
Likes: Sex, apple juice mixed with vodka, shiny things like silver and gold, amethysts, bloodstone, gay things, sleeping, fluffy things like blankets and stuffed animals.
Dislikes: Being cold (unless sleeping), baths/showers, spiders, his back being touched or his hind paws/feet, not being able to fly, loud clattering or sudden noises, others eating with their mouth open (he will burn your food), and strong musky smells or perfume/cologne.
Other: Hel is able to use black magic that's the same green color as his flames he uses. He also has a pair of ram horns and a phantom wing that appears when he lets his hell being side come forth, this includes a wing on the other side of his body and a segmented halo with green fire between the 'spikes'. In addition, the omega's paws have the ability to glow at will or when angered.
The lonely wolf isn't much of an outcast when he gets to know people and finds it easy to get along with everyone and easily get's laid when he is out with friends. His friends are the key point of how he relaxes and shows his true self and more flirty sexual predator side. Though, it seems hard to get on this pretty canines bad side, but when you get there, you know it because he will do the small things like misplacing your car keys or pick pocketing you for your wallet so he can hide it in a place you'll never think of looking like in that plant you set next to a little bit ago. Just because you might have pissed him off, doesn't mean that he will hide his emotions and deal with you when he has to, such as if he doesn't want to make his best friend pick and choose who they wanted to have at a party or when prowling around town.
The things people won't see often are Hel dealing with small children and being friendly or even helpful on getting the kid to their parents when lost. Him being an omega means he tends to have the mother hen quality in him when it comes to friends and even children, however he will pick and choose when he wants to be friendly or when he wants to scare them off. With that being said, Hel would never have children unless he were to adopt or be forced into raising a child.
Another side note, Hel happens to have a baby blanket he has had since he was a pup that he would never get rid of. The blanket is the last thing he has left of his family (ties in with mine that belongs to my baby sister who was a miscarriage! It's the last thing left of her). This big fluffy ball of fur also likes to worm his way into your lap for a belly rub or head rubs when you're not careful. Hel tends to act like a pup when he isn't putting on a show for anyone, this is complete with his need to play fetch and chew on things he probably shouldn't or leave hickeys in places he shouldn't.